END_OF_DOCUMENT_TOKEN_TO_BE_REPLACED

GOLD PRICES held onto a rally above $1800 per ounce in London on Tuesday, trading 1.2% above last Friday's 3-week low in Dollar terms as the US currency rallied on the FX market, current Fed chair Jerome Powell began giving testimony on fighting inflation to Congress, and longer-term interest rates steadied ahead of tomorrow's key US inflation data following their sharpest jump since the Covid Crisis struck in March 2020.
Despite 2-year US Treasury yields rising to end last night at 0.92% per annum, the highest since February 2020 and over 75 basis points above the level of 6 months ago, the 2 largest gold ETFs – the SPDR Gold Trust (NYSEArca: GLD) and iShares product (NYSEArca: IAU) – were both unchanged in size on Monday, snapping a run of light liquidation by shareholders to remain their smallest in a week.
Gold then rose from $1792 overnight to peak above $1810 per ounce today as the US Dollar rallied from 7-week lows on the FX market.
The chances of the Fed raising its overnight interest rate 4 times from today's level of 0% in 2022 now stand near 3-in-5 according to futures-market positions, says the CME's FedWatch tool.
That's almost twice the likelihood priced by interest-rate traders this time last month.
The Fed capped its last hiking cycle by raising rates 4 times in 2018, taking its ceiling target from 1.5% up to 2.5% – then just a little above where inflation was running, the first such move to positive real interest rates since New Year 2005, eve of the subprime housing bust. 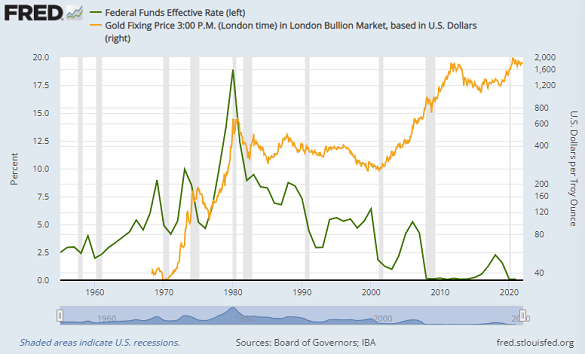 The US stock market ended 2018 down more than 4% on the Wilshire 5000 index, its worst (and only) annual drop since the near-40% crash of 2008.
Three months later, and a full year before Covid reached the States, the US bond market signalled that a recession was due in the world's largest economy, with the first yield curve inversion of 3-month versus 10-year rates since July 2007 preceded the global financial crisis.
"Rate hikes may come as soon as March and this is an element that is keeping gold on the side-lines for now," says bullion-market specialist Rhona O'Connell at brokers StoneX.
"On the other hand, the composition of [last Friday's] NonFarm Payrolls arguably works against an imminent hike, and the steadying of the 2-year [Treasury bond] yield may back that up."
"Mild Omicron and an aggressive Fed may hurt gold," reckons a column at Bloomberg, noting that "a sharp increase" in inflation-adjusted interest rates as implied by the yield on TIPS bonds would typically dent the precious metal, but "hasn't unsettled the gold price – yet."
"Inflation expectations are coming down," notes a trading analysis from Swiss refiners and finance group MKS Pamp, "but nominal yields are rising on expectation of stronger recovery (and faster Fed taper/hike), which has spiked real yields dramatically.
"That's a short-term move in real 10-year yields the markets haven't seen since March 2020 (pandemic D-day), which wreaked havoc in both FX markets and gold; and it was simply induced by the Fed (and the 'urgency' to [address] inflation ahead of mid-terms by some thinking)."
Fed chair Jerome Powell will today testify to Congress as part of his re-nomination process, with his opening statement – published last night – repeating his concerns over the need to prevent inflation becoming "entrenched" plus his commitment to "achieving maximum employment".
2022, reckons that column at Bloomberg, is "an environment in which the Federal Reserve can make good on its suddenly tougher talk about inflation without endangering the recovery."