END_OF_DOCUMENT_TOKEN_TO_BE_REPLACED

GOLD PRICES jumped against a weakening Dollar and Euro in London trade Wednesday as new US jobs data came in badly below analyst forecasts, driving longer-term interest rates down and pushing some inflation-protected debt yields to fresh series lows.
Gold, like silver, then fell back in afternoon trade, erasing its jump and more to trade at $1810 per ounce as silver fell to $25.30, also now slightly down for the week so far.
"Such low levels of real rates point towards markets pricing stagflation risk," says a note from US investment bank Goldman Sachs, pointing to 10-year US TIPS yields of minus 1.2% per annum and comparable German rates hiting minus 2.0%.
With rising Covid cases worldwide now worsening the supply-chain bottlenecks that have helped drive inflation up to multi-decade highs, "The new wave has not only brought into question the timing of next steps" for tapering QE and raising interest rates at the Federal Reserve," says analysis from Canada's BMO.
"It's also raised concerns that this might be the new normal."
Service-sector activity across the 19-nation Eurozone continued to surge last month, the Markit PMI data agency said today, but growth slowed from the new series record first reported on July's preliminary surveys.
Yesterday's news of strong orders at US factories in June meantime contrasted Wednesday with the ADP Payrolls estimate of last month's US jobs growth, as a net addition of 330,000 across the world's largest single economy missing expectations by more than half.
The US government's non-farm payrolls estimate is due out Friday. Consensus forecasts see 880,000 jobs being added.
Gold prices spiked to $1825 per ounce on Wednesday's ADP figure, towards the top of the last 5 weeks' $40 range above $1790.
But gold typically shows a strong inverse relationship with 10-year TIPS yields, and on a rolling 250-day basis, that inverse correlation has fallen to its weakest since June 2019, giving an r-squared of less than 40%.
That's less than half the 91% averaged across 2020. 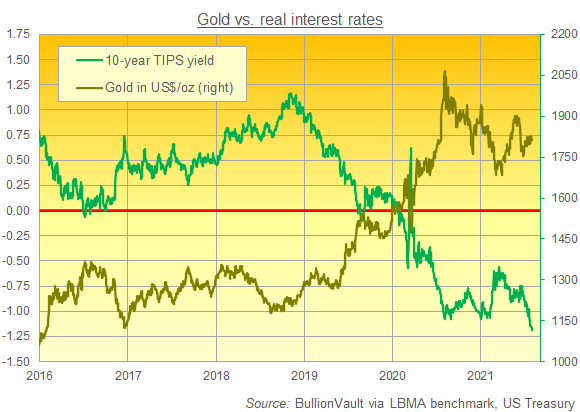 "I've been wracking my brain over this," says John Lynch, chief investment officer at $2.3 billion asset managers Comerica Wealth Management, "but if copper is outperforming gold, that is global investors saying they believe the reflation trade more than they want to be parked in the safe-haven of gold."
The price of copper – often so closely linked to broader global growth that it's sometimes known as 'the metal with a PhD in economics' – fell 1.2% by lunchtime in London on Wednesday, but it held over 50% higher from this time last year having set new all-time highs in May.
Gold bullion in contrast traded $20 per ounce below its price of this day last year, and is currently $250 below its all-time high of $2075 per ounce, hit on 6 August 2020 as inflation-adjusted US bond yields fell to then-record lows beneath minus 1.0% per annum.
"The excitement [and] exuberance behind the massive vaccine rollout globally is being walked back," says strategist Nicky Shiels in New York for Swiss bullion refining and finance group MKS Pamp.
"The vaccine is no silver bullet [and it's becoming] increasingly politically divisive if vaccinated majorities are required to change lifestyles for the unvaccinated minority.
"Macro markets [however] retain the 'bad is good' mantra. The delta variant is simply a greenlight [for government and central banks] to inject more liquidity and is a net positive for risk assets."
US stock-market futures slipped 0.1% after the ADP data, but global stock markets held onto earlier gains after recording their second fresh all-time high in a week on the MSCI World Index last night.
Conventional bond yields also sank Wednesday, with "Italy's 2-year yield below the European Central Bank’s deposit rate of minus 0.5% for the first time today," says Lisa Abramowicz at Bloomberg.
"The entire German yield curve turned negative this week and Japan’s 10-year bond yields fell to zero, a level last seen in December."
Euro gold prices today jumped to €1537 per ounce, up 0.6% for the week so far but still 12.2% below last August's top at what was a new all-time high for gold in March 2020 as the global Covid pandemic first took hold.
The UK gold price in Pounds per ounce rose less steeply, reaching £1311 to trade 17.0% below last August's all-time high.