END_OF_DOCUMENT_TOKEN_TO_BE_REPLACED

DOLLAR gold prices slipped with global stock markets and bond prices on Wednesday as US economic growth came in stronger than expected on new data ahead of a speech from Federal Reserve chief Jerome Powell.
Losing $10 per ounce from an earlier rise through $1760, gold priced in Euros poked above €1700 per ounce for the first time in a week while the UK gold price in Pounds per ounce also reached its highest since last Wednesday at £1469.
The world's largest economy accelerated to expand by 2.9% annualized between July and September, said the Bureau of Economic Analysis, but with cost-price inflation slipping only a little from the spring's 4-decade highs.
New data from the 19-nation Eurozone meantime said 'core' inflation in the world's 2nd largest economic bloc held at 5.0% per year this month, while the headline rate slipped 0.6 points from October's new series record but held at 4-decade records in both the union's No.2 economy France and No.3 Italy.
"A higher inflation target is desirable," says French professor and former IMF chief economist Olivier Blanchard, writing in the Financial Times and repeating his call – first made in 2010, depths of the global financial crisis – for central banks to raise from their current 2% target to aim for 4% per year.
"I would be surprised if central banks officially moved the target" if inflation slows to 3% next year, says Blanchard, "but they might decide to stay higher for some time and maybe, eventually, revise it."
"Higher inflation floors for longer, higher precious [metal price] floors for longer," says strategist Nicky Shiels at Swiss bullion refining and finance group MKS Pamp. 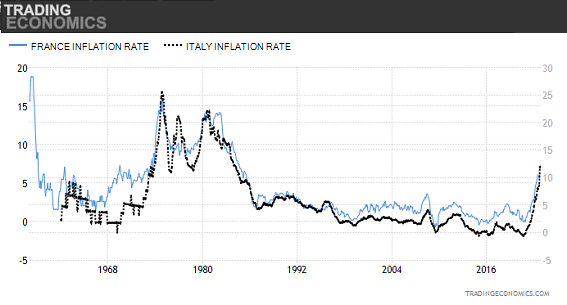 With annual inflation in gross domestic purchase prices rising 2.4 percentage points from Q3 last year to 7.0% on the BEA's new GDP data, the US Fed has already hiked its overnight interest rate at the fastest pace since the early 1980s, while 10-year US Treasury yields – a key benchmark for government and commercial rates – have risen over the last 12 months at their steepest pace since 1984, adding the same 2.4 points to the annual cost of new borrowing, now at 3.77% today.
The UK and Germany have meantime seen the steepest rise in 10-year bond yields since 1981 at 3.0 and 2.4 points respectively.
Raw materials prices rose Wednesday, led by energy prices extending their rebound as the Opec oil cartel debates fresh cuts to output, while cold weather hit Europe.
With natural gas rising 12.2% across November on European January contracts, local benchmark Brent crude oil has lost 10.0%.
Separate data today said the US has added 1/3rd fewer jobs this month than analysts expected on the private-sector ADP Payrolls' estimate.