END_OF_DOCUMENT_TOKEN_TO_BE_REPLACED

GOLD PRICES reached new multi-month highs in London trade Tuesday, trading within $5 per ounce of what technical analysts called "key resistance" at $1835, a level last seen in June, as global stock markets edged upwards from their 6th fresh all-time record in a row ahead of tomorrow's US inflation data, expected to show the cost of living continued to rise at the fastest pace in 3 decades last month.
The UK gold price in Pounds per ounce touched £1350 for the first time since May, and the Euro gold price rose to €1580, its highest since New Year.
Government bond prices also rose, pushing longer-term borrowing costs lower as energy prices eased back from their latest multi-year highs.
"As the talk about an America SPR release intensifies, one thing to remember," says Bloomberg energy correspondent Javier Blas of White House comments on using the Strategic Petroleum Reserve to ease supplies and dampen prices.
"The US has already released year-to-date [around] 28.7 million barrels from the reserve via different programs. We don't have a counterfactual, but WTI has still risen above $80 a barrel."
"Focus now turning to US CPI on Wednesday," says one spread-betting bookmaker's analyst ahead of tomorrow's consumer-price inflation data, "and whether gold can find enough momentum to challenge key resistance at $1835."
"Gold is eyeing critical resistance $1835/40 area," says another, "coming from three highs between July and September [and from] downtrend resistance from the August 2020 $2075 high."
"Real action on gold prices will begin if it touches $1835," adds a third. 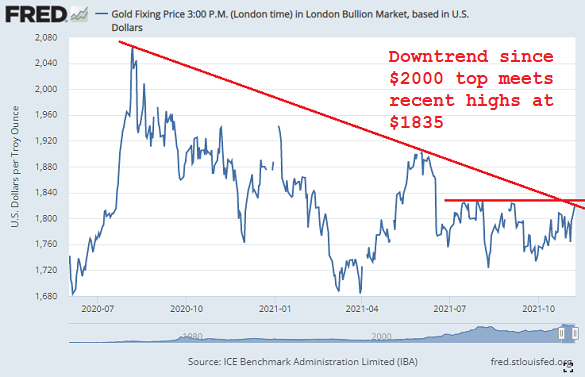 Betting on interest-rate futures now puts the odds of a US rate rise at 12% for March next year, 26% for May, and 57% for June, according to the CME derivatives exchange's FedWatch tool.
Feb 2023 will then see US rates raised at least twice from today's level according to 71% of current trader positioning.
"I wouldn't expect anything imminent from the Fed," Reuters quotes Nicholas Frappell at Australian refiners ABC Bullion, "but an above-consensus CPI could make the market's anticipation of a 2022 rate hike more likely."
US politics may offer a challenge to gold prices rising, says a trading note from Swiss refiners and finance group MKS Pamp, "[because] if President Biden's approval ratings (and thus the Democrats) continue to fall, implications for the midterms are not bullish for gold."
The world's largest economy is now 12 months past Joe Biden beating Donald Trump for the White House, and 12 months away from the mid-term vote for Congress and the Senate.
A new opinion poll for USA Today now puts Biden's approval rating at its lowest to date, down to 38% among US adults.
The share of voters saying they "strongly approve" of Biden's performance has sunk to just 15% according to a separate poll for CNN, down from 34% in April.
"A fiscally conservative Republican make-up [on the Hill after next November's midterms], with much less spending, at a time when the Fed is likely hiking, is liquidity sapping and negative for gold prices," says MKS.
"While we are clearly a ways away from considering raising interest rates," said Fed vice-chair Richard Clarida in a presentation to the Brookings Institution yesterday, "if [my] outlooks for inflation and unemployment turn out to be the actual outcomes realized, then I believe that [the] necessary conditions for raising the federal funds rate will have been met by year-end 2022."
But "judging from where the economy stands today," said renowned 'dove' Charles Evans, president of the Chicago Fed, in separate remarks to the OESA Automotive Supplier Conference, "it looks like we are in for a low rate environment for some time to come.
"If you look at surveys of households or measures derived from financial markets, longer-run inflation expectations appear either roughly in line with or even a bit below the FOMC’s 2% average inflation goal.
"So with the caveat that none of these indicators are very precise, they signal today's outsized inflation as being temporary."
Over in Asia, struggling Chinese property giant Evergrande (HKG: 3333) – reported to owe US$305 billion – today raised $145m by selling assets ahead of a key debt repayment deadline.
"Evergrande missed the initial interest deadlines last month," says Bloomberg, and a 30-day grace period with creditors expires Wednesday.
"The due date looms as credit-market stress spreads beyond China's junk-rated builders," the newswire goes on, with "higher-quality [Chinese] Dollar bonds suffering their worst sell-off in months."
"Given the size of China's economy and financial system as well as its extensive trade linkages with the rest of the world," says the US Federal Reserve's latest financial stability review, "stresses in China could strain global financial markets through a deterioration of risk sentiment, pose risks to global economic growth, and affect the United States."
The Fed's report also notes the last 12 months' strong growth in asset valuations across the US financial system, with mutual funds expanding 27.9% to $21.5 trillion – nearly 3 times the long-term average annual growth rate – while hedge funds have expanded by 12.1% (1.4x faster than trend) and broker-dealers 10.7% (2.1x).