END_OF_DOCUMENT_TOKEN_TO_BE_REPLACED

GOLD PRICES flattened against the weak US Dollar in London on Thursday just shy of $1800 and falling to 1-week lows for Euro and UK investors as commodities, stock markets and crypto extended their gains following yesterday's softer-than-expected US inflation data.
Silver prices today tracked gold, holding flat in USD at $20.55 per ounce but slipping for UK and Euro investors as their currencies rose against the greenback on the FX market.
Platinum-group metals continued to outperform the formerly monetary metals, with the price of platinum – used in hydrogen fuel-cell as well as diesel-engine technology – rising towards 9-week highs above $969 per ounce as palladium, which finds 4/5ths of its end-user demand from gasoline-engine autocatalysts, broke above yesterday's new 3-month high to reach $2290. 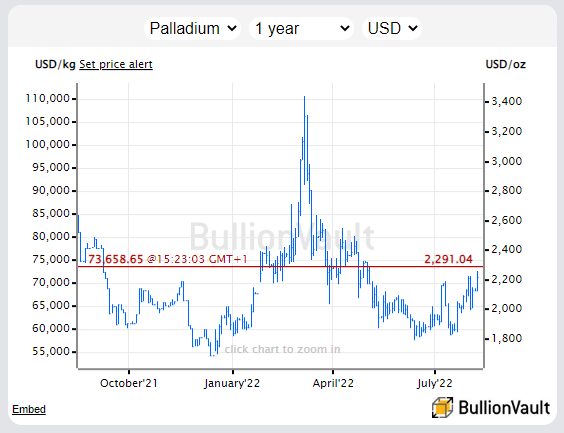 Longer-term US bond yields meantime held flat around 2.80% per annum on 10-year Treasuries, but European borrowing costs rose as government bond prices slipped.
"Today we received news that our economy had zero percent inflation in the month of July," said Democrat US President Joe Biden yesterday of the 0% month-on-month move in CPI due to gasoline prices sinking 7.7% from June to " offset increases in food and shelter" according to the Bureau of Labor Statistics.
While technically correct, the President is "lying to everyone" according to some social media posts quoted by pro-Republican news channel Fox.
"We don't want to declare victory on inflation coming down," said San Francisco Fed president Mary Daly – a non-voting member of the US central bank's policy team this year – in an interview with the Financial Times following Wednesday's CPI data.
"We're not near done yet...Inflation remains far too high."
"[We're] far, far away from declaring victory" agreed Minneapolis Fed president Neel Kashkari at a conference, repeating his call for the Fed Funds rate to reach 3.9% by New Year from its current 2.5% ceiling.
Targeting a 3.5% ceiling for end-December, the Chicago Fed's Charles Evans – also calling July's data "positive" – meantime repeated Daly's comment that inflation remains "unacceptably" high.
Despite the jaw-boning from Fed members, betting on a half-point hike at next month's policy meeting – rather than another 0.75 move – continued to grow overnight, with derivatives exchange the CME's FedWatch tool reporting the strongest market-derived probability of the US central bank raising from 2.5% to 3.0% per annum so far this month.
"Gold is once again seeing Asian selling after spiking to a high of $1807 overnight," said a note from Swiss bullion refining and finance group MKS Pamp this morning.
Western investors were also small net sellers of gold-backed ETF trust funds on Wednesday, shrinking the volume of bullion needed to back the value of those exchange-traded products worldwide – already down more than 5% from October 2020's record level – by 0.1% for the day.
Like the USA, inflation in India – set in 2022 to recover its crown from China as gold's No.1 consumer nation – also slowed in July, dropping 1 percentage point from April's 8-year high of 7.8%.
"As European countries turn away from Russian imports, India has proven a ready market for discounted Russian thermal coal," says investment rating and data agency S&P Global, while Urals crude now accounts for 15% of India's oil imports, up from zero prior to the Putin Government's attack on Ukraine.
Russia's own inflation rate also fell for the 3rd month running in July, official statistics said Thursday, slowing to 15.1% per year from April's 2-decade high of 17.8%.
However, "core consumer prices [excluding food and fuel] kept soaring faster," says data-site Trading Economics, "jumping 18.4% over July of 2021" according to Moscow's Federal State Statistics Service.
Oil-producer cartel Opec today trimmed its forecast for 2022 growth in world crude demand to 3.2% while the Paris-based IEA agency raised its forecast to 2.1% growth.
Average US gas prices at the pump yesterday fell below $4 per US gallon, data from motorists' association the AAA says, the cheapest since early March.