END_OF_DOCUMENT_TOKEN_TO_BE_REPLACED

GOLD PRICES jumped against all major currencies bar the Japanese Yen in Asian and London trade Thursday, setting a 22-month high versus the US Dollar after the Federal Reserve held its interest-rate and QE policy unchanged yet again, citing weaker jobs growth, low inflation, and next week's UK Brexit referendum.
The Fed's inaction was followed by another "no change" decision from the Bank of Japan – now creating and spending ¥6.7 trillion per month ($64bn) on QE asset purchases, while charging commercial banks a negative interest rate of 0.1% per year – and also from the Bank of England in London, which has now held UK rates at 0.5% for 7 years, and owns some 25% of the UK government's record-high £1.5 trillion ($2trn) of outstanding debt.
Tokyo's Nikkei stock index sank 3% as the Yen rose to September 2014 highs on the FX market.
European stock markets fell for the 8th in 12 sessions so far in June, while industrial commodities slipped 0.5% and major government bond prices rose, pushing the yield offered by 10-year German Bunds to new record lows at minus 0.02%.
Gold hit $1313 per ounce at the start of London dealing, its highest level since September 2014, but silver held 20 cents shy of start-May's 15-month high above $18 per ounce.
Gold priced against the Euro rose faster than versus any other major currency, adding 3.6% for the week so far to break 3-year highs above €1173 per ounce. Priced in Australian Dollars, gold neared its all-time records of 2011.
After Fed voting member Esther George dissented at two meetings running by calling to raise rates, the FOMC was unanimous Wednesday in holding the US central bank's key interest rate at 0.50%.
Only 2 of the 17-member committee now foresee the Fed Funds rate rising to 1.00% by the end of 2016, down from 7 in the April projections and down from 13 last December, when the US central bank finally hiked from 0% after six years at that record low.
" [Brexit] was one of the factors [in] today's decision," said Fed chair Janet Yellen at her press conference, responding to a question about next Thursday's UK referendum on quitting the European Union.
Gold priced in British Pounds today jumped above £920 per ounce as Sterling retreated from a brief bounce on the currency market following the Fed announcement.
Slipping back towards Tuesday's new 2-month lows at $1.41, the falling Pound has helped drive prices to buy gold 28% higher for UK investors so far in 2016 – the fastest 6-month gain since the global financial crisis peaked with the US debt downgrade, Eurozone crisis and English rioting of summer 2011. 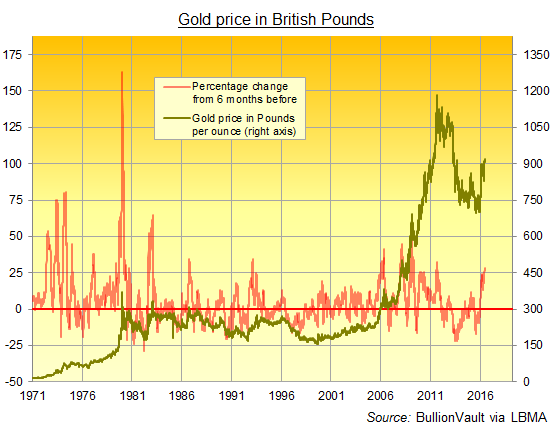 "Were it not for next week's Brexit vote, the Dollar would probably have sold off more after last night's Fed meeting," reckons a currency note from Dutch bank ING.
"Should the UK electorate vote to leave the EU a week today," says Chinese-owned commodity, FX and bullion-broking ICBC Standard Bank, "we'd expect to see coordinated G7 intervention to stabilise the currency market.
"Movements in Sterling post a Brexit result seem very likely to conform to the 'disorderly' market conditions that both G7 and G20 central banks and finance ministers don't want to see."
"It is not [so] much the UK leaving the EU that is troubling," says a gold recommendation from French investment and bullion bank Natixis – forecasting a Dollar price jump to $1375 per ounce on a Brexit result next week – "but what it means for the future of the European project.
"Euroscepticism is clearly on the rise in EU member countries," Natixis says, pointing to polls saying that 61% of French voters view the EU unfavourably, as do 49% in Spain, 48% in Germany, and 46% in the Netherlands.
"The UK has always been...lukewarm to the idea of being part of the EU [but] a Eurozone member leaving (even a small sized member) could create a much bigger shock and announce the beginning of the end of the Euro currency."
Calling gold "an excellent hedge against a local currency debasement," Natixis advises clients to buy Comex gold options with a strike price of $1375, because the $10 cost would be a "minimal loss...should the UK vote to remain" while offering "important gains" if it leaves.
Even in a Bremain scenario, says London bullion-market clearing bank HSBC's analyst James Steel, "gold would likely be well supported by a number of outside factors" such as the US Fed revising down its expected rate hikes for 2016, plus slow global growth and the coming US presidential election in November.
"These factors may well act to buoy gold regardless of the results of the UK referendum."