END_OF_DOCUMENT_TOKEN_TO_BE_REPLACED

GOLD PRICES bounced $5 per ounce higher from near 4-month lows in London trade Friday as new US data put the jobless rate in the world's largest economy at a fresh half-century low.
With non-farm payrolls expanding by 263,000 in April against the 185,000 consensus forecast from analysts, the US unemployment rate fell to 3.6%, its lowest since December 1969.
Average wage growth failed to rise however, holding at March's annual pace of 3.2%.
Gold priced in the US Dollar cut its drop for the week to $11 per ounce at $1275, and silver prices jumped 1.4% from yesterday's new 2019 lows to trade at $14.77.
With gold prices between January and March hitting new or near all-time highs in many currencies outside the US Dollar, the first 3 months of 2019 marked the weakest first quarter for fabricated gold-product demand since 2016, new data from the mining-backed World Gold Council said Thursday.
While gold-backed ETF investment trust demand was positive for a second consecutive calendar quarter, central-bank gold buying rose steeply from Q1 2018 to extend last year's half-century record.
Jewelry, technology, coin and small-bar demand however totaled 876 tonnes on the World Gold Council's presentation, some 5.5% below the last 5 years' first-quarter average.
That put the global gold market's physical surplus – of mining plus scrap supply over fabricated product demand – some 25% above the last 5 years' first-quarter average before accounting for gold ETF and central-bank demand. 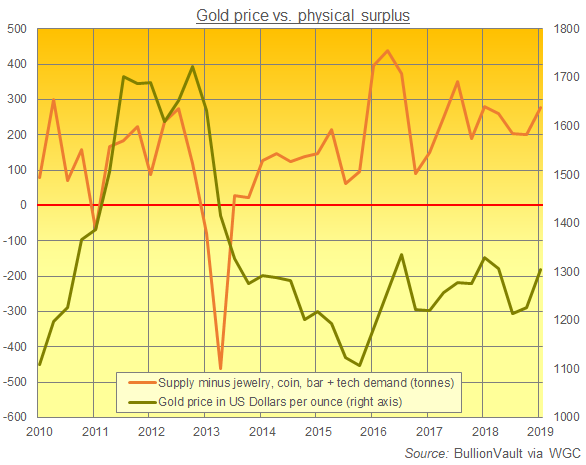 "Jewelry demand in India rose 5% from Q1 2018," the World Gold Council's latest Gold Demand Trends says, pointing to "21 auspicious wedding days in the Hindu calendar" between January and March, "three times that of Q1 2018."
No.1 gold consumer nation China in contrast saw household demand drop by 2% year-on-year because "gold prices were relatively volatile and consumers remained wary of the slowdown in the
domestic economy, particularly against the background of the international trade conflict."
Looking at this week's US central bank comments on Dollar interest rates meantime, "I think the Fed has really moved to the sidelines," Yahoo Finance today quotes Chris Zaccarelli at Independent Advisor Alliance
"They're concerned about just keeping the expansion going. If anything, I think what really brings them back into play will be inflation that starts to overheat."
Along with Friday's jobs report, US corporate earnings reports for Q1 have also beaten Wall Street's expectations, notes Fortune magazine.
Western government bond yields held little changed Friday while crude stabilized above $70 per barrel of Brent crude, down $5 from late-April's 6-month oil price highs.
Hong Kong and European stock markets meantime edged upwards as financial markets in Japan and China remained shut for national holidays, including the Tokyo and Shanghai gold exchanges.