END_OF_DOCUMENT_TOKEN_TO_BE_REPLACED

GOLD PRICES jumped Friday lunchtime in London, erasing a previous drop to show a 0.7% weekly rise after new data said US inflation is now the highest in 4 decades.
Silver also rose, but it failed to recover last Friday's finish with a weekly drop of 1.8% at $22.54 per ounce, down 7.3% from this time last December.
Annual inflation in the US Consumer Price Index accelerated to 6.8% last month, its fastest pace since June 1982 and 3 times its average rate of the last 30 years.
November's jump from October's 6.2% reading on the Bureau of Labor Statistics' data was led by gasoline and energy costs – now 1/3rd more expensive than a year ago – plus housing, food, used cars and trucks.
Excluding food and fuel, the so-called 'core' CPI index rose by 4.9%, its fastest pace since May 1991.
Separate data meantime said Friday that new claims for jobless benefits fell yet again last week, hitting the lowest since 1969.
Longer-term US interest rates slipped back however, edging 2-year Treasury bond yields down to 0.67% – some 4 basis points below Tuesday's 21-month high – while 10-year yields eased to 1.46% per annum, 11 basis points above last week's finish but still 20bps below October and November's peaks.
Heading into the weekend at $1780, the gold price gained $13 per ounce from last Friday's London PM benchmarking auction – a tightly regulated process launched in 2015 that's now subject to new, informal guidelines for participating banks and dealers, Reuters reports, aimed at encouraging greater activity in what remains the single deepest moment of daily gold bullion liquidity worldwide.
That put gold in US Dollar terms 3.5% below this time 12 months ago. 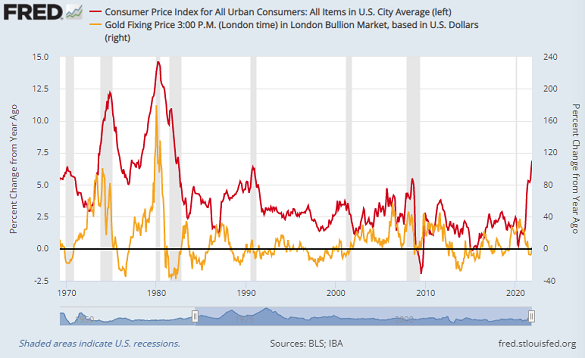 Asian stock markets had earlier fallen for a 2nd day running, but European bourses held flat overall while New York opened the day higher.
Other government bond yields slipped as US Treasury rates fell despite the new inflation spike, with 10-year German Bunds offering new buyers a negative yield of minus 0.35%.
The No.1 Eurozone economy, Germany's cost of living last month rose 6.0% per year on the 19-nation currency union's harmonized methodology, putting its HICP index 7.2% higher from this time 3 years ago with an annualized rise of 1.5% across the past quarter century.
UK Gilt yields meantime fell to their lowest in 3 months after this week's GDP report said the British economy showed almost no growth in October, hit by "supply chain problems" even before fears around the Omicron variant of Covid-19 began denting activity ahead of the work-from-home advice and vaccine passports set to become mandatory for nightclubs and larger events venues from next week.
"Public view on Biden's handling of Covid and the economy takes another hit," says CNBC of a new US opinion poll, with the President now seeing more disapproval than approval of his pandemic management for the first time.
China's consumer-price inflation rate rose sharply in November but missed analyst forecasts at 2.3% per year in new data released Thursday.
Producer prices, in contrast, slowed less than expected from October's quarter-century record, easing only to 12.9% per year.
Silver's relative decline versus gold today pushed the Gold/Silver Ratio of the two formerly monetary metals above 80 for the first time since October 2020.
"Comparing the current business cycle to previous ones, inflation numbers are way higher and look sticky," says a new gold-price outlook from Australasian bank ANZ.
"This should keep real interest rates deep in negative territory in 2022...[helping] lift investments in gold in the short-term, and that could increase the prospects for an earlier hike and faster tapering."
Next week will bring central-bank meetings and announcements from the USA, Eurozone, Japan and UK, plus from No.1 silver mining nation Mexico and gold No.3 Russia, as well as gold No.5 consumer-nation Turkey.
Platinum prices joined gold in showing a small weekly gain Friday, rising to $940 but trading almost 10% below this time last December.