END_OF_DOCUMENT_TOKEN_TO_BE_REPLACED

GOLD PRICES rose today back towards last Friday's 14-week high ahead of the benchmark London fixing, trading $2 above that level at $1838 per ounce as new US data said the world's largest economy is recovering much less quickly than inflation in the cost of living.
"The economy is ripping, it is going gangbusters – pick your favorite metaphor," said Federal Reserve policymaker Christopher Waller in a speech Thursday.
"But we need to remember," he said, "that it is coming out of a deep hole," calling the current spike in inflation "transitory" and also repeating the Fed's official line that "highly accommodative monetary policy...still [has] a way to go before we fully recover."
Global stock markets extended yesterday's rally after losing 2.8% in a week from new all-time highs on the MSCI World Index.
Major-economy bond prices also steadied on Friday, edging longer-term borrowing costs down from Thursday's 2-year highs for the UK and Germany.
Inflation-protected US Treasury bonds meantime showed a yield of minus 0.89%, reversing this week's earlier rise of 4 basis points from last Friday's 12-week low.
Week-to-week, gold prices have moved in the opposite direction to 10-year TIPS yields 2/3rds of the time across the last 5 years.
So far in 2021, and on a rolling 22-day basis, gold's average correlation with 10-year TIPS yields is almost as strong at -0.59 as its positive correlation with sister-metal silver of 0.60. 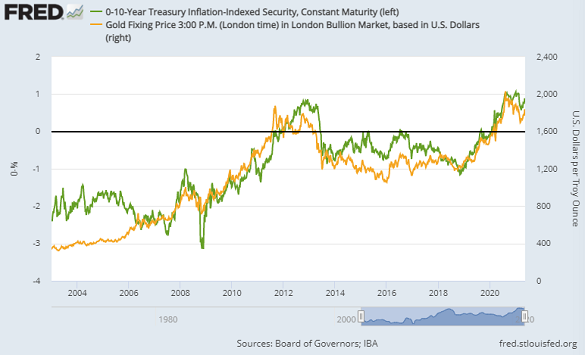 "A reasonably strong correlation between the two," says precious-metals specialist Rhona O'Connell at brokerage StoneX.
"The real 10-year yield is negative and is not going into positive territory any time soon, especially if the Fed has its eyes on the long end" of the interest-rate curve, "[having] alluded to the possibility of yield curve management."
Most certainly O'Connell adds, "The Fed is not going to throw the economic recovery off course by raising nominal rates to a level whereby the real rate turns positive in an inflationary environment.  And that bodes well for gold."
After last Friday's jobs data for April came in way below analyst forecasts, this week's consumer-price and factory-gate inflation figures both blew past predictions to give their fastest headline readings in 13 years.
But retail sales today showed a surprise drop for April from March, down by 0.8% excluding auto sales, while industrial production missed consensus forecasts of 1.0% growth by almost one-third of a per cent.
"Concerns of rising inflationary pressures," says the Asian trading desk at Swiss refiners and finance group MKS Pamp, "[plus] a broader risk off tone across markets, saw the precious metals push higher yesterday.
"[Thursday's] higher factory-gate prices in the US saw the Dollar weaken, while bond yields also slipped...[and] helped investor demand in the sector with gold rallying [as it also] found some support from Chinese investors."
Chinese gold prices today fixed at 3-month highs above ¥381 per gram in Shanghai's wholesale market, even as the Yuan pushed higher towards January's 2.5-year peaks versus the Dollar on the currency market.
Together that spiked the Shanghai premium – meaning the gap between prices in China, gold's No.1 consumer nation, and in its global trading hub of London – to $15.75 per ounce, the greatest 1-day incentive for new bullion imports since May 2019.
Covid-hit India, in contrast, has seen gold demand collapse this month, with jewelers in the metal's No.2 consumer nation missing out on $1.3 billion of sales for this week's Hindu festival of Akshaya Tritiya and the Muslim festival of Eid according to the Confederation of All India Traders (CAIT).
Israel today continued to bombard the Gaza Strip, taking the Palestinian death-toll to 119, as Iran-backed Hamas fired more rockets onto Tel Aviv, where at least 6 have died in this outbreak of fighting, now spurring street violence between Arab and Jewish communities within Israeli towns and in the West Bank.
Thursday's volatile action in gold prices saw no major change in size for either of the precious metal's two largest ETF trust funds.
Silver's SLV trust fund expanded by 0.3%, seeing its first net investment inflows for 5 sessions but still on track for its 14th weekly outflow in a row.
Silver prices today regained last Friday's finish above $27.40 after dropping 2.5% by mid-week.
Platinum prices meantime held below $1230 per ounce, erasing half of last week's gain after touching new 11-week highs at $1280 on Monday.