END_OF_DOCUMENT_TOKEN_TO_BE_REPLACED

GOLD PRICES spiked against a rising Dollar in London trade Tuesday, recovering an earlier 0.7% drop to trade around $1815 per ounce as US traders returned from yesterday's MLK holiday to find both global stock markets and bond prices lower.
Ahead of next week's policy decision from the US Federal Reserve, and with crude oil prices rising to 7-year highs amid supply problems and geopolitical tensions in the Middle East, the continued fall in bond prices pushed longer-term US interest rates up yet again to fresh pre-Covid highs, while real-estate debt problems worsened in China, gold's No.1 consumer market.
Ten-year Treasury yields hit 1.85%, the highest since January 2020. Gold prices were then trading below $1600 per ounce.
"Last week was the first time since the late 1980s that press coverage on the gold market has been so completely focused on a US CPI number," says Rhona O'Connell at brokerage StoneX of the latest 4-decade high for inflation in the world's largest economy.
"[That] demonstrates how much emphasis is being placed on whether inflation is transitory or permanent, and what the world's various governments and Treasuries are going to do about it." 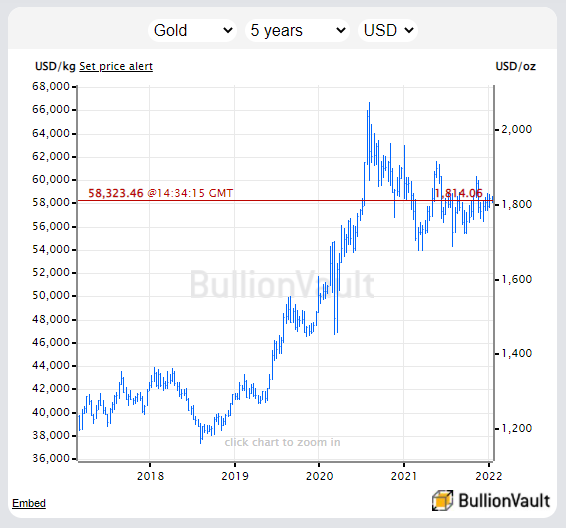 While few traders expect a hike this month, more than 14-in-every-15 bets on the Fed's March policy decision now predict that the US central bank will raise its key interest rate to a ceiling of 0.50%, with a further rise in each of June, September and December also now the most popular trade for those months according to the CME derivatives exchange's FedWatch tool.
With consumer prices showing the fastest inflation since 1982, Friday's US industrial output data for December showed a surprise drop while retail sales sank.
Manufacturing activity in New Year 2022 has now " abruptly leveled off in New York State," the local branch of the Federal Reserve said in its latest survey Tuesday, ending 18 months of unbroken growth.
Gold prices for Euro investors today spiked within 50 cents of €1600 per ounce and the EuroStoxx 600 index fell 1.0% even as new economic sentiment data across the 19-nation currency union came in at the most positive since July on the ZEW survey.
The  UK gold price in Pound per ounce also rose back above last weekend's level, trading up to £1338 after new data said UK wages lagged inflation in November for the first time in more than a year, with the surging cost of living more than offsetting 4.2% annual growth in total pay.
Debt owed by Chinese property group Agile (HKG: 3383) – now trading below 45 cents on the dollar for bonds due to mature this year – was meantime downgraded today further into "junk" status by both S&P and Moody's, while credit analysts at Fitch said they see no "meaningful recovery" in the world No.2 economy's real estate sector before the 2nd half of the year.
Agile's shares rallied 1.7% from yesterday's 6-year low in Hong Kong, putting its market cap at US$1.8 billion but with over $12bn of outstanding debts, more than $4bn of owed in US Dollars to foreign investors.
China's central bank yesterday cut interest rates for the first time since April 2020, having already promised to inject more short-term funds into the money market ahead of the Lunar New Year holidays, travel and shopping spree now underway, while the authorities imposed further Covid restrictions and testing requirements ahead of the winter Olympics due to start in 3 weeks.
The Yuan still rose Tuesday on the currency market, nearing last month's 3.5-year high against the Dollar and helping push Shanghai gold prices down to a 1-week low.
That failed to dent the incentive offered to new imports of bullion however, with Shanghai prices trading $6.25 per ounce above equivalent London quotes, more than 50 cents above the average premium of the last 3 months.
"Chinese [gold consumer] demand is solid ahead of the New Year," says O'Connell at StoneX, "although it may not be dramatic as people are nervous of travelling for the holiday so the gift giving may be relatively muted this year."