END_OF_DOCUMENT_TOKEN_TO_BE_REPLACED

GOLD and SILVER PRICES rallied from near 1-week lows against the US Dollar in London trade Tuesday, trading unchanged from this time last year despite further outflows from the largest bullion-backed ETF trust funds as global stock markets fell for a 3rd session running, down almost 14% from 12 months ago on the MSCI World Index ahead of next week's interest-rate decision from US central bank the Federal Reserve.
With the cost of living on track to end 2022 with its highest annual jump since 1982 on the Fed's preferred 'core' PCE measure, now running at 5.0% inflation, the central bank has raised its key interest rate 6 times to a current ceiling of 4.00% per annum.
Betting on next week's US Fed decision now sees only a 1-in-5 chance of a fifth consecutive 0.75-point hike, down from a better than 3-in-4 shot as recently as mid-October.
Gold today added $10 to trade at $1775 per ounce, while silver briefly retouched $22.60, also its highest since May when reached in last week's steep rise.
However, giant gold-backed investment fund the SPDR Gold Trust (NYSEArca: GLD) yesterday saw shareholder liquidation for the 3rd session running, shrinking the world's largest gold ETF by 0.5% since last Wednesday, eve of gold's steep price spike to 5-month highs at $1810.
That investor outflow takes the GLD to its smallest since end-January 2020, shrinking almost 30% from that September's peak to need 903 tonnes of gold to back its shares – soon to be split between current custodian HSBC and competitor bullion market-maker and clearing bank J.P.Morgan.
Smaller gold ETF the iShares IAU meantime ended Monday just 1 tonne larger than last Thursday's new 30-month low of 450 tonnes, also shrinking marginally across the last week as gold prices have jumped on the Dollar's retreat. 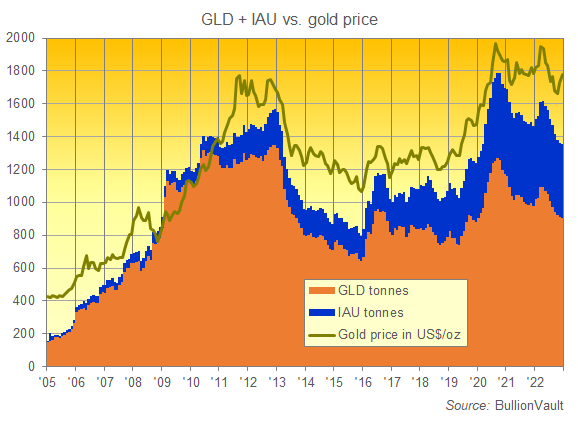 The combined size of the GLD and IAU gold ETFs has now moved in the same direction as Dollar gold prices in only 8 of 12 months this year, the weakest co-movement since 2011 marked the top of gold's financial-crisis bull market.
Silver's giant SLV trust fund yesterday saw its 6th consecutive day of shareholder liquidation, taking the quantity of bullion needed to back its shares down below 14,773 tonnes.
Two per cent larger than mid-November's 30-month low, that makes the SLV silver ETF 10.5% smaller for 2022 to date.
Silver investors were net sellers in November for the first time since mid-2016 on BullionVault – the largest marketplace for private trading in physical precious metals.
"Despite multi-decade high inflation, gold and silver prices have not made gains this year," says a new 2023 forecast from analysts SFA (Oxford) published by German refining group Heraeus.
That lack-luster performance in precious metals has come "thanks to persistent strength in the US Dollar as the Federal Reserve has aggressively hikes interest rates," says the report, "[but] a weakening economy may lead the Fed to change course, resulting in a weaker Dollar and potential upside for gold and silver."
After the USA's services sector showed solid growth for November on the ISM PMI survey yesterday, the US trade deficit with the rest of the world today showed a sharp widening for October, setting what would be a new record excess of goods and services imports over exports at $78bn if not for the last 12 months' run to deeper deficits peaking at $106bn in March.
The drop in world stock markets saw government bond prices rise Tuesday, with 10-year US Treasury bond yields edging back from yesterday's bounce from 11-week lows of 3.50% per annum.
Predicting a near repeat of 2022's trading range with a high of $1920 and a low of $1620 per ounce for next year, the Heraeus/SFA outlook also predicts a near repeat for silver, with the more industrially-useful precious metal forecast to move between $17 and $25 per ounce.
Plans to spread the GLD gold ETF's bullion bar backing between vaults in New York and Zurich as well as in London represents an "innovation" in gold ETFs according to a spokesman for the trust fund's sponsors, part of the mining industry's World Gold Council.