END_OF_DOCUMENT_TOKEN_TO_BE_REPLACED

GOLD PRICES edged back from yesterday's spike towards 6-month highs against a falling US Dollar on Wednesday, matching the nervousness shown in other financial markets ahead of today's interest-rate decision from the Federal Reserve after new data showed US inflation slowing more than analysts expected.
Headline consumer-price inflation in the world's largest economy slowed from 7.7% to 7.1% per year in November, the Bureau of Labor Statistics said yesterday, with 'core' inflation excluding fuel and food also slowing back to a pace seen at the start of this year of 6.0%.
With US Dollar gold prices leaping 2.0% on that news, the giant GLD gold-backed ETF expanded by 0.3% to its largest size in 6 weeks, but world No.2 gold ETF the IAU – also listed in New York – remained the smallest in nearly 30 months.
Silver's largest stock exchange-traded trust, the SLV, meantime saw further outflows of investor money, shrinking to its smallest in 4 weeks as silver bullion prices leapt on the inflation data to touch 8-month highs above $24 per ounce before giving back half that move to $23.71 this morning.
Betting on today's US Fed interest-rate decision now sees a half-point hike as almost certain, with betting on a 0.75-point hike – which would mark the 5th such move in a row – falling to put the odds at barely 1-in-5.
The Fed in 2022 has already made the steepest rate hikes since Paul Volcker "had to wring inflation out of the system" in 1980. 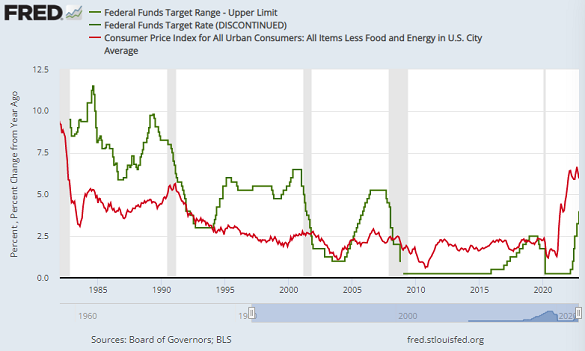 "There's clearly a belief that the end of the tightening cycle is in sight," Reuters quotes one spread-betting bookmaker's analyst.
"Traders are just waiting for the Fed to give the nod."
The release of November's US inflation data saw gold prices leap 2.0% for the day in Dollar terms, fixing at London's PM benchmarking auction at $1823 per ounce, the highest since late-June.
But much of that move came thanks to the US Dollar falling hard on the FX market, dropping to its lowest value against the rest of the world's major currencies since the same day – 27 June – on its DXY Dollar Index.
Priced in other currencies, gold rose only 1.2% in Euros and 0.9% in British Pounds yesterday before reversing almost all of those gains on Wednesday to trade back at €1697 and £1459.
Global stock markets also gave back earlier gains today, holding the MSCI World Index flat for December so far after it rallied 1.2% on Tuesday's US inflation data.
US government bond prices in contrast held onto yesterday's jump, squashing the 10-year borrowing cost down to 3.47% per annum, still 5 basis points above last Wednesday's 3-month low.
November marked the "2nd straight month where CPI comes in less than expected," says Nicky Shiels, strategist at Swiss bullion refining and finance group MKS.
"The slowdown in core [excluding fuel and food] will be welcome news for Fed doves, gold and equity bulls...[It's] more than good enough to reaffirm the narrative that the Fed slows [its rate hikes] and gold remains in its newly established bull trend!"
UK consumer-price inflation also slowed more than analysts expected in November, new figures said today, dropping from its own 4-decade highs to 10.7% per year.
Inflation in the 19-nation Eurozone's average cost of living slowed from a currency-union record of 10.6% to 10.0% per year last month.
European gas and electricity prices fell back again on Wednesday as the continent's western cold snap was forecast to ease off this weekend.
Brent crude oil in contrast held firm after rallying almost 10% from last week's 12-month lows.