END_OF_DOCUMENT_TOKEN_TO_BE_REPLACED

GOLD PRICES sank London lunchtime on Wednesday, dropping near 3-week lows versus a rising Dollar as today's widely expected QE tapering decision from the Federal Reserve was preceded by a raft of stronger-than-expected US data.
With the US Fed set to announce the beginning of the end for its historic $120 billion per month in new quantitative easing bond purchases, private-sector payrolls provider ADP said the world's largest economy added 571,000 jobs last month, ahead of September and blowing past analyst forecasts of 400,000.
Both the Markit and ISM data agencies then said service-sector activity accelerated in October, with ISM's data showing new all-time series highs both for new orders and input-prices paid.
Global stock markets slipped back after setting another new all-time high yesterday on the MSCI World Index.
The gold price in US Dollars sank almost $25 per ounce, falling to $1762, while Euro gold prices hit €1524 – down more than 1.1% from this morning. 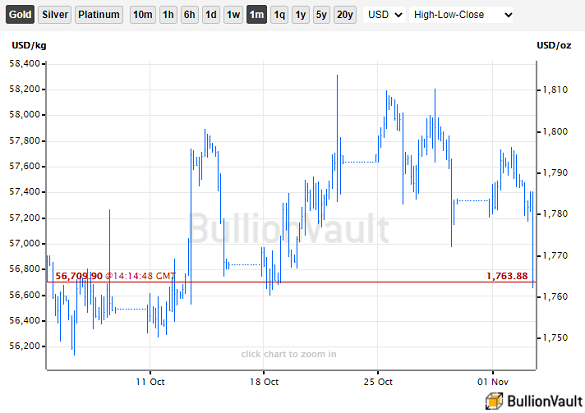 "Markets are expecting the Fed will announce the start of tapering today, and are also pricing in rate hikes for next year, not only from the Fed but also from the European Central Bank," Reuters quotes gold-market analyst Peter Fertig of Quantitative Commodity Research.
"Interest rate rises still appear to be a long way off for the Fed and the ECB," counters analysis from SFA (Oxford) for German bullion refiners Heraeus.
"If inflation continues to run hot, then investors could return to gold as a safe haven."
Data from the CME derivatives exchange says that the bulk of interest-rate traders continue to expect the first Fed hike in June 2022, while betting on a move in March has edged back from this time last week.
But for December 2022, more than 3-quarters of betting now sees the Fed raising twice or more next year, with betting on 'no change' by then collapsing from 1-in-3 to beneath 1-in-20 over the last month.
"Rate-hike bets are escalating across Asia," says a headline at Bloomberg, with traders now pricing in rate rises within the next 3 months for world No.7 economy India and No.10 South Korea, driven by US interest-rate forecasts plus the surge in energy and raw material costs.
Australian coal prices, however, have sunk by nearly 40% in the last 3 days after China's Communist dictatorship moved to squash domestic prices and boost domestic mine output.
Crude oil prices also fell back sharply today, down 2.9% on US contracts and 2.4% on Europe's Brent benchmark, as major producer Mexico was rumored to be "in the process of locking in its annual oil hedge," says Bloomberg, "one of the most closely watched deals among the world's energy traders."
Imposing strict lockdowns against a new 'wave' of Covid, China's Communist Party has also told citizens to stockpile food amid tightening social and travel restrictions.
Original source of the global SARS-CoV-2 pandemic, China today reported 104 new cases, primarily of the Delta variant first identified in India.
With a population of 1/20th China's size, the UK has averaged 161 daily deaths from Covid across the last week, with more than 1,000 new daily hospital admissions.
For major Western economies, only UK government bond yields rose Wednesday morning, edging London's 10-year borrowing costs up to 1.05% per annum, still well below last month's 2.5-year high of 1.21% per annum.
Shorter-term Gilt yields fell in contrast, pulling 1-year rates down below 0.45% per annum, more than 0.20 points below last month's peak at the highest since January 2020, eve of the Covid Crisis.
The Dollar held 0.5% below mid-October's 12-month high on its trade-weighted index against the world's other major currencies.
Sterling meantime bounced from its 3-week lows against the Dollar and the Euro, helping squash the UK gold price in Pounds per ounce back near £1290 per ounce, down 1.9% from Tuesday's test of 8-week highs.
Traders in the Sterling interest-rate market are betting on a 0.15 percentage-point rise from the Bank of England tomorrow, ending its current all-time record low of 0.1%.
Silver tracked and extended the losses in gold, dropping near $23.00 per ounce for the first time in a fortnight.
Platinum prices also retreated, but the white precious metal – used in autocatalysts to reduce harmful diesel-engine emissions, and finding growing demand from hydrogen fuel-cell technology – continued to show a small gain for the week so far at $1027.
Yesterday's central-bank vow to delay any rise to Australia's interest rates until 2023 at the earliest was followed Wednesday by weaker than expected data for new building permits in September, plus a small decline in services-sector activity for October on Commonwealth Bank's PMI survey.
Eurozone unemployment slipped to 7.4% in September, separate figures showed – the lowest since April 2020.