END_OF_DOCUMENT_TOKEN_TO_BE_REPLACED

GOLD spiked from fresh 6-year lows against the Dollar but sank versus the Euro on Thursday as the single currency jumped despite extended QE and more negative interest rates from the European Central Bank.
Stock markets in the Euro union – the world economy's single largest currency zone – turned a 1.3% gain into a 2.5% plunge for the day as the Euro jumped more than 3 cents against the Dollar on the FX market, hitting 2-week highs 2.5% above a new 9-month low set just before today's ECB announcement in Frankfurt.
Gold priced in Euros sank to €980 per ounce – a level first reached on the way up as the Greek debt crisis broke in May 2010 – dropping 1.7% within 90 minutes to trade below its level at end-2014 for only the second time this year. 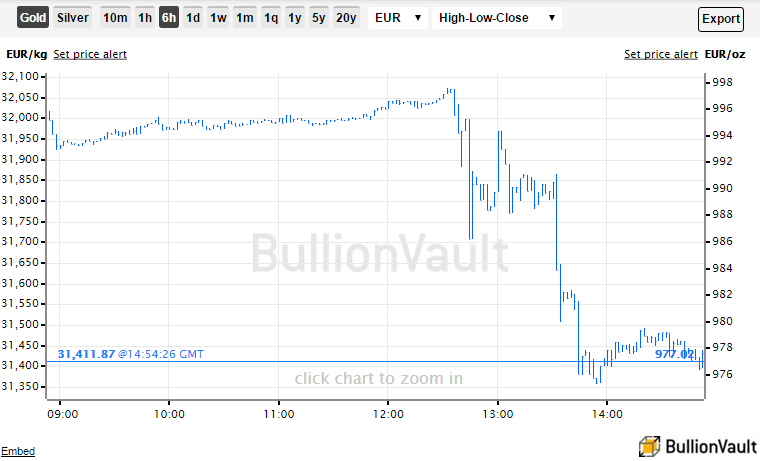 Bullion priced in US Dollars, in contrast, rebounded 1.5% from new 6-year lows set at $1046.50 per ounce at the start of Thursday's Asian trade.
Silver jumped 2.2% bottom to top, regaining last week's closing level at $14.10 per ounce after setting new 6-year lows at $13.85.
"We are doing more because it works, not because it fails," said ECB president Mario Draghi in his press conference after Thursday's decision.
Already holding €445 billion of Euro government debt through its QE bond-buying scheme, the ECB today announced a 1-year extension of its €60 billion asset purchases to March 2017 – "or beyond, if necessary [in] achieving inflation rates close to 2%."
Eurozone "core" inflation excluding fuel and food prices last month slowed to 0.9% on latest data.
Regional and municipal bonds are also now eligible assets for the Bank to acquire, Draghi said after the ECB cut the interest rate on its deposit facility for commercial banks by 0.1 percentage point to minus 0.30% – like the time extension to QE, much less dramatic than some economists had expected.
With maturing bonds payments also now set for re-investment in more Euro government debt, however, that cut to the ECB's deposit rate enables it to buy shorter-term German, French, Italian and other bonds already priced so highly that they yield up to that much less than zero.
"The market has been discussing this for more than a month," Tokyo FX strategist Masafumi Yamamoto at Mizuho Securities told Reuters earlier.
"So...any easing steps it may take today are already priced in and the Euro could rise."
Positioning data from US regulator the CFTC show speculative betting against the Euro rose sharply last week, reaching 90% of March's all-time record high level.
Looking at gold, "Perhaps the only bullish variable is that everyone is mostly bearish," said a note overnight from US brokers INTL FCStone, "likely making the markets ripe for a massive short-covering rally."
Gold's new 6-year low against the Dollar at $1046.50 per ounce came in early Asian trade Thursday after US Federal Reserve chair Janet Yellen was joined by two formerly "neutral" voting members in saying a rate rise from 0% is highly likely at the December Fed meeting in 2 weeks' time.