END_OF_DOCUMENT_TOKEN_TO_BE_REPLACED

GOLD BULLION rallied but failed to regain yesterday's 3-week highs in Asian and London trade Thursday morning, holding little changed for the week against a rising Dollar at $1268 per ounce as world stock markets slipped once again.
Reviewing its new July-to-September data, "For the third successive quarter physical demand for gold remained at pitiful levels," says the latest analysis from specialist research team Thomson Reuters GFMS, "down 30% year-on-year in Q3."
Gold bullion's jump to multi-year highs at the start of the third quarter – following the UK's shock Brexit referendum result – drove more investment money into derivatives and gold-backed ETF trust funds, says GFMS, but that "only exacerbated the appalling state of physical demand.
"The two largest markets, India and China, saw jewelry consumption down 41% and 27% respectively year-on-year...2016 appears set to record a seven-year low in China and a 13-year low in India."
China's net imports of gold bullion through Hong Kong – still the major port of entry ahead of Beijing and Shanghai according to local commercial bank sources – totaled almost 45 tonnes in September, Bloomberg reports, up from the news-wire's figure for August but more than half the level of the same month last year.
Year-to-date however, China's gold bullion imports through Hong Kong now stand 10% ahead of the first 9 months of 2015.
"The surge of 2013 saw payback in 2014," said Australian bank Macquarie's precious metals analyst Matthew Turner at last week's 2016 London Bullion Market Association conference, "but China's gold bullion imports have been consistently high since."
Comparing his own estimates of China's total supply availability against the lower estimates of Chinese gold demand from specialist research groups, "This gap has arisen in the last three to four years," Turner went on, suggesting that the discrepancy is explained by growing central bank and also commercial Chinese bank bullion holdings. 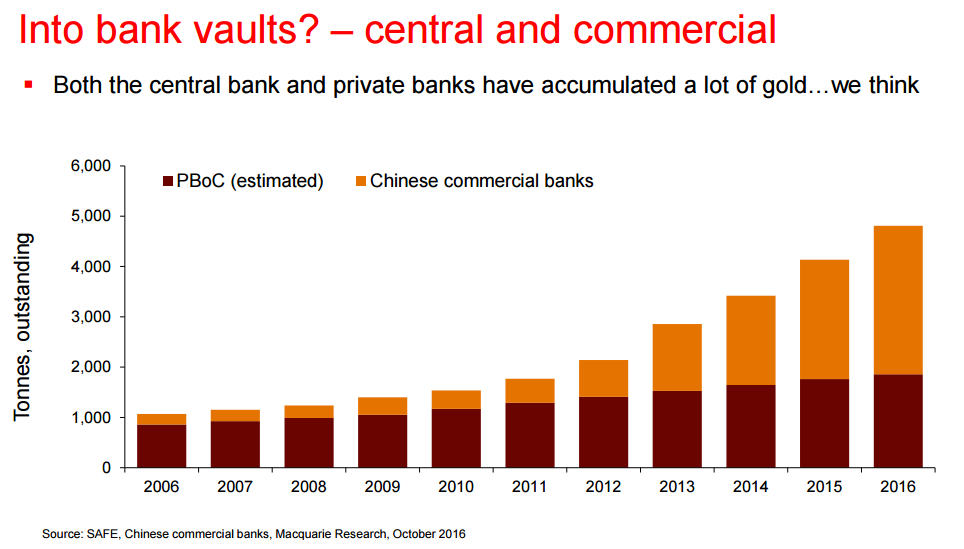 Libya's UN-appointed head of the presidential council, Fayez Al-Sirraj, meantime told an interview with Libyan TV that the embattled state could sell some of its physical gold bullion reserves – the world's 29th largest national hoard – to "solve the cash shortages" in the north African country.
"We have rejected such a demand," countered the Central Bank of Libya's governer Al-Seddiq Al-Kabeer today, "as it would rid us of strategic reserves. Without them, Libya’s last economic defense would collapse."
Libya's reported gold reserves last changed in late 2011, reduced by almost one-fifth to 116 tonnes as four-decades' dictator Muammar Gaddafi used bullion to pay mercenary troops defending his regime after the Arab Spring spread and led to rebellion in the oil-rich north African state.
Gadaffi's birthplace, the coastal town of Sirte – also scene of his death 5 years ago – today neared liberation from the self-declared caliphate of ISIS according to US media reports, with Western and Arab coalition forces continuing airstrikes.