END_OF_DOCUMENT_TOKEN_TO_BE_REPLACED

GOLD BARS in London's wholesale bullion market traded at their cheapest in a month on Thursday, dipping below $1770 per ounce as global stock markets and commodity prices fell yet again following US Federal Reserve chair Jerome Powell's "pivot" towards tapering new QE faster and raising interest rates sooner in the face of the worst inflation in 3 decades.
Government debt prices rose, in contrast, edging longer-term borrowing costs lower as more countries imposing travel restrictions and quarantines, with new cases of Omicron confirmed worldwide and South Africa saying it has become the dominant variant of Covid-19 locally with infections doubling in 24 hours.
Since setting a 6th consecutive new record high on 8th November, the MSCI World Index has now fallen in 10 of the following 17 sessions, losing 5% from that peak. 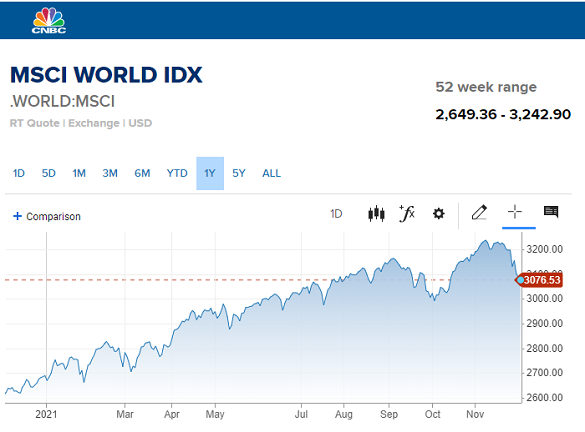 Crude oil meantime fell Thursday near $65 per barrel of US benchmark WTI, the cheapest since late-August and nearly $20 below late-October's 7-year high.
Silver prices extended the drop in gold bars to test their cheapest Dollar level since end-September's 14-month lows, dipping overnight through $22.20 per ounce as platinum tried but failed to recover last weekend's level, dropping back almost 2% inside 1 hour Thursday lunchtime in London.
"Jay Powell effectively jettisoned the Fed's previous stance," says the Financial Times about this week's testimony to Congress from the US central bank's chairman.
"[This] sent a clear message to markets: combating inflation...is now the top priority [meaning] a faster reduction of the central bank's massive bond-buying programme [plus] leeway to raise interest rates more quickly than expected."
Ahead of Friday's key US jobs data for November, new claims for jobless benefits rose less-than-expected last week on new figures today, with continuing claims falling harder than forecast.
But inflation forecasts in the bond market have now fallen to the lowest in 8 weeks, predicting 2.44% per year between now and 2031 – fully one-third of a percentage point below mid-November's series record high and almost 4 percentage points below October's actual annual pace of CPI inflation.
Five-year breakevens have also seen their steepest plunge since the Covid Crash hit global financial markets in March 2020, dropping almost 0.5 percentage points inside 2 weeks.
The more respected 5-over-5 measure of bond-market forecasts now sees US inflation averaging 2.18% between 2026 and 2031, near the lowest reading in a month and back below its average across the  decade ending as the Covid pandemic began in New Year 2020.
Prices paid by US manufacturers edged back in November on the ISM's index of input costs, but held at what would be a decade-record if not for 2021's earlier surge.
New data from the Caixin survey of Chinese manufacturers yesterday said that the sector shrank in November, while factory activity-growth in the 19-nation Eurozone and the UK  also missed forecasts to edge back further from the summer's record rate of expansion on the Markit PMI index.
With London's FTSE All Share trading 2.3% lower from this time last month, the UK gold price in Pounds per ounce today set new 1-month lows with a dip below £1330.
Euro gold bullion bar prices held near 4-week lows beneath €1565 as the EuroStoxx 600 index lost 1.6% for the day, near its weakest since mid-October.
"The best case for gold is high but decelerating inflation," reckons analysts at Canadian brokerage T.D.Securities, because "[it] may leave the US central bank comfortable keeping the economy running hot for longer."