END_OF_DOCUMENT_TOKEN_TO_BE_REPLACED

GOLD BARS in London's wholesale market slipped to 4-week lows against a rising Dollar on Tuesday, dipping beneath $1490 per ounce as global stock markets and bond prices also struggled.
Eurozone government debt prices fell hardest, edging the annualized return offered by Germany's 10-year Bund up to -0.56% – the least negative yield in a month – ahead of Thursday's final policy announcement from current European Central Bank chief Mario Draghi.
"As the risk of recession in Europe rises, the ECB must act," says The Economist magazine, urging more negative interest rates and fresh QE asset purchases.
"The economic data are dreadful," claims the Financial Times.
"Go big," agrees Reuters.
"[But] Draghi is facing an unprecedented pushback against restarting QE," say Bloomberg's correspondents in Frankfurt, with Germany in particular calling for "a more collegial style" in running policy for the 19-nation currency unio from incoming ECB President Christine Lagarde.
Euro prices for large gold bars bottomed in early Asian trade Tuesday at €1345 per ounce, the cheapest since mid-August and 4.9% below last week's fresh all-time record high.
Yesterday's close saw bond investors offered negative returns on triple-A Euro debt as far out as 2045 according to data from the ECB. 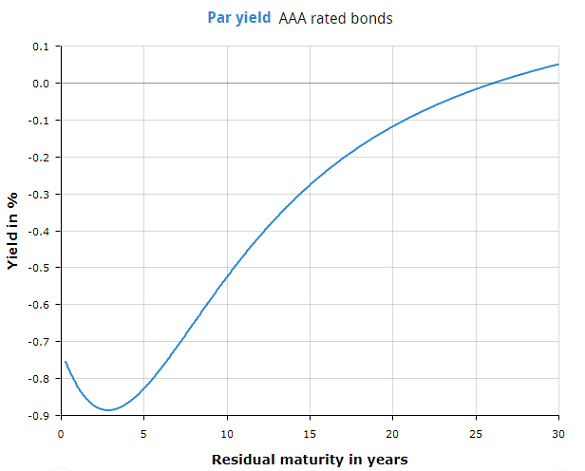 With gold in Dollars losing 4.3% from last Wednesday's new 6.5-year high at $1557 on Tuesday, the price of silver also fell for the 4th session running, losing 9.5% from near 3-year highs at $19.65 per ounce.
Platinum prices bottomed below $930 for the 3rd time in a week, some 7.0% beneath the sudden spike towards $1000 of the last month.
Other commodities in contrast rose on Tuesday, taking the CRB index of natural resources up 0.5% to the best since 31 July.
"We now expect gold prices to trade stronger for longer," says a new report from analysts at US financial giant Citigroup, forecasting "possibly $2000...at some point in the next year or two."
"Citi's bullish scenario for gold is based on...the Federal Reserve cutting interest rates to zero...a global recession, and heightened geopolitical tensions," says Bloomberg in 1 of 3 articles headlining the analysis.
Citigroup's new view is also reported today by Reuters, the Financial Times, the South China Morning Post, and the UK's Telegraph among many others.
Wholesale gold bar prices in China also retreated near 3-week lows on Tuesday, fixing 4.2% below late August's 7-year highs in Shanghai.
That cut the price of gold bars landed in China – the No.1 gold mining, importing and consumer nation – to $8 per ounce above London quotes, the weakest premium since May, when rumors began circulating that Beijing was restricting bullion import licenses and quotas.
The UK gold price in Pounds per ounce meantime edged higher from an early trough at £1204 per ounce – the lowest since 6 August, and 6.1% beneath last week's new record high –  as Sterling retreated from its highest FX rate against both the Dollar and the Euro since late July.
With Parliament now shut and Prime Minister Johnson banned in law from allowing the UK to leave the European Union without a deal on Halloween, "The fading likelihood of a no-deal Brexit at the end of October should continue to support Sterling," says Swiss bank and bullion-bar dealer UBS in a note.
"Any progress towards securing a deal with the EU could see the Pound strengthen to around $1.30 against the US Dollar," some 5% above Tuesday's rate, and should a new deal get Parliamentary approval after the prorogation to 14 October, Sterling "could move even higher" says UBS.