END_OF_DOCUMENT_TOKEN_TO_BE_REPLACED

GOLD BARS traded in London headed for bullion's first $100 weekly loss since March 2020's Covid Crisis on Friday, holding onto yesterday's plunge after the US Federal Reserve signalled an earlier end to its pandemic policy of zero rates and record QE bond buying.
Dropping over 5% from this time last Friday, gold has only fallen faster in 7 weeks across the last decade.
Gold bars priced in Euros fell less steeply however, down 3.6% for the week and trading back below €1500 per ounce as the US Dollar rose on the FX market following the Fed's message on Wednesday.
The UK gold price in Pounds per ounce fell a similar percentage this week, trading down at £1282.
"Fund managers have to cut their losses while individual investors see it as an opportunity to buy," says Bruce Ikemizu of the Japan Bullion Market Association.
"Naturally your behaviour is different depending on your position."
With gold bullion slipping back in London to $1775 on Friday lunchtime – its lowest weekly close since end-April – longer-term interest rates stabilized, with 30-year US Treasury yields holding onto yesterday's steep drop following the Federal Reserve's signal that it will raise short-term rates a little earlier than forecast in 2023.
The gap between 30-year and 5-year US yields has shrunk at its fastest 2-day pace since the DotCom Bubble peaked in March 2020, marking a flattening of the yield curve "consistent with markets seeing the Fed having provided cover for other central banks to tighten earlier," according to one strategist.
"We should [still] aim to exceed the pre-pandemic growth trajectory," said Italy's prime minister (and former European Central Bank chief) Mario Draghi today, calling for continued and additional monetary and fiscal stimulus.
"We will not reach this objective without additional effort. So we must act on it promptly and effectively."
With London gold bullion bars trading at $1784 overnight, prices in Shanghai today fixed $2 above that, showing a premium to the world's central trading and storage hub for the first time since 1st June.
The typical Shanghai premium of $9 per ounce – effectively an incentive for new imports of gold bars to China, the No.1 gold consumer nation – sank to record discounts in 2020 amid the Covid pandemic and lockdowns, signalling a glut of domestic supply over demand.
New Year 2021's return to Chinese premiums then evaporated again earlier this month after Beijing issued new anti-money laundering rules across a raft of financial industries, including fund management and also gold trading. 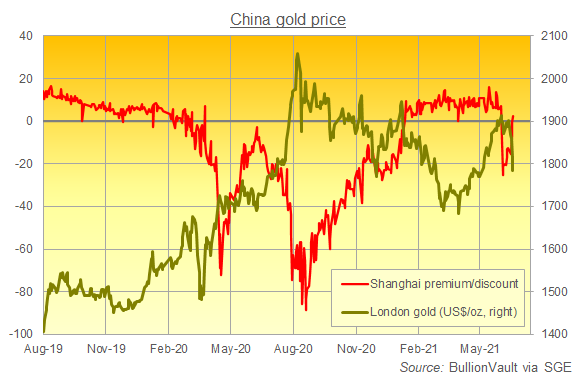 "China is quietly stepping up its interventions in markets," says a headline at Bloomberg after Beijing's Communist Party dictatorship ordered state-owned firms to cut their overseas holdings of commodities, told local banks to hold more foreign currency, discussed a cap on coal prices, blocked internet searches for crypto-currency terms, and "effectively banned brokers from publishing bullish equity-index targets."
Beijing will also sell some of its national reserves of copper, aluminum and zinc, the National Food and Strategic Reserves Administration said Thursday, after prices for the key industrial metals set fresh all-time highs last month.
"However, a metals trader said the news was unlikely to hit prices too much as it had already been priced in," reports Reuters.
Copper led another drop in base metal prices on Friday, falling back to mid-April levels – some 15% below last month's new all-time high – as European Brent crude oil dropped back to $70 per barrel, a 3-week low.
Input prices at Chinese factories rose last month at their fastest annual pace in 12 years according to its Producer Price Index.
Beijing will from 1st August demand new standards and "transparency" in how commodity-price indexes are compiled.
Export data from major gold-bar refining nation Switzerland show China, Hong Kong and the metal's other major south-east Asia consumer nations taking in 118 tonnes of bullion bars in the first 5 months of 2021, contrasting with net outflows to Switzerland of 60 tonnes during January-May 2020's Covid Crisis.
"This is largely borne of bargain hunting in the early part of this year," says brokerage StoneX's chief bullion analyst Rhona O'Connell, "and particularly the release of pent-up demand in China in the New Year celebrations, momentum that has largely been sustained."
But now "the key issue" is No.2 gold-consumer nation India, O'Connell says, because "after a very meagre year" the re-imposition of lockdowns amid 2021's surge in Covid cases and deaths has seen a spike in Swiss gold imports via the Middle East, very likely driven by outflows from the sub-continent.