END_OF_DOCUMENT_TOKEN_TO_BE_REPLACED

PRICES to buy gold headed on Friday for their 3rd highest month-end ever and the highest weekly finish in London since early November, eve of the first successful Covid vaccine trials announcement, amid rumors of heavy central-bank gold buying, a fresh rise in crude oil and other industrial input costs, plus the highest inflation on the US Fed's preferred measure in nearly 3 decades.
Losing $100 per ounce on Monday 9 November, the day of the Pfizer/BioNTech news, gold prices bottomed in March at $1675.
Today gold priced in US Dollars rose to $1896 ahead of the 3pm LBMA benchmarking buy-sell auction in London, having risen through $1900 earlier this week.
New US inflation data today said the cost of living in the world's largest economy, excluding 'volatile' fuel and food, rose almost 3.1% per year in April, the fastest annual rise in the core PCE index since July 1992.
With the yield offered to buyers of 10-year US Treasury debt ending last month at 1.65%, that put long-term interest rates 1.4 percentage points below inflation, worse than any time since 1975. 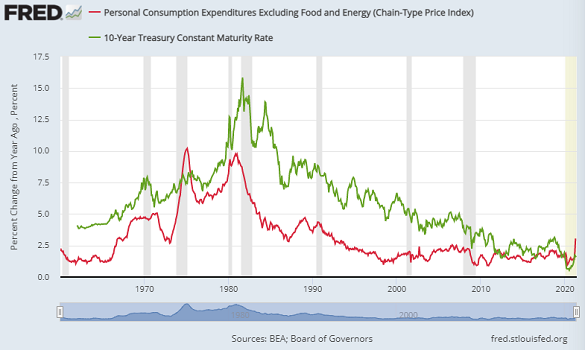 So-called base effects continue to drive annual inflation higher however, because last April saw the core PCE index rise just 0.9% from 12 months before, near its slowest pace of the last 6 decades.
Crude oil prices, having gone below zero in April 2020's Covid Crash as producers struggled to find storage space amid the collapse in demand, today rose back to $67 per barrel of US benchmark WTI, a record high when first reached in 2006.
Shipping costs for China-to-Europe freight have meantimejumped to record highs, up 5-fold from this time last year, says the Drewry World Container Index.
Back in the gold market, gold being bought inside the Bank of England's vaults – heart of the world's wholesale bullion market – "has traded for as much as 50 cents above benchmark London prices," claims Bloomberg today, citing "sources" and "traders" and suggesting this signals strong demand among official-sector agencies, defying earlier analyst forecasts for moderate central-bank gold demand in 2021.
The Bank of England held over 5,640 tonnes of gold at end-April according to data on its website, all but 310 tonnes – the UK's own gold reserves – held for foreign governments and central banks, as well as international bodies and also the commercial-bank clearing members of the London Bullion Market Association.
The Bank for International Settlements – the central banks' central bank – "bought as much as 1 million ounces...from various commercial banks at a premium of 30 to 40 cents recently," Bloomberg claims.
With the BIS typically acting for central-bank clients, analysts at Commerzbank this week said new data show the Bank of Thailand buying 43.5 tonnes of gold for its reserves in April, while Uzbekistan added over 8 tonnes and Kazakhstan over 4 tonnes.
How London 'spot' gold prices typically work is to be quoted for unallocated ounces, a credit position owed by the selling bank to the client, who can then pay a small premium for allocation into specific bars belonging to the buyer outright and therefore incurring storage fees.