END_OF_DOCUMENT_TOKEN_TO_BE_REPLACED

PLATINUM PRICES fell $30 per ounce from a fresh 6-year high in London trade Thursday, cutting this week's jump to 10.1% as gold and silver moved sideways while industrial metal copper set a new 8-year high.
Energy prices eased back and global stock markets were little moved overall as China shut for its week-long Lunar New Year holiday.
Longer-term interest rates fell in the bond market and the US Dollar slipped further from last week's 2-week high on its trade-weighted currency index.
"We believe that this upward re-rating in platinum's price is fundamentally justified," says Rhona O'Connell at brokerage StoneX, "as the market looks again at the potential for a substantial uptake into the hydrogen economy and also to the ultimate recovery in the auto sector."
On top of jewelry and investment, platinum-group metals find industrial use in autocatalysts for reducing harmful emissions from gasoline (palladium) and diesel (platinum) engines, as well as chemicals and glass production, hydrogen energy, and hard-disks in computer servers.
"When conditions finally recover – and we get past the semi-conductor crisis – there could be something of a scramble for metal," says O'Connell, with investors "buying in anticipation" today.
Because new vehicles today rely on so many digital switches, the shortage of microchips forced new car sales in China to drop over 11% last month from December, the China Association of Automobile Manufacturers said yesterday, and it threatens auto-production worldwide reports CNBC.
"[It] all starts with the unprecedented demand for personal computers and peripherals as the globe worked and attended school from home," the news-site quotes one semiconductor industry analyst, and supplies "are very tight" according to iPhone brand-owner Apple (Nasdaq: AAPL).
Last year's "dramatic increase in home working has [also] driven an expansion in 'cloud' storage requirements," say precious-metal technology specialists Johnson Matthey in their new 2021 platinum-group metals report, "supporting sales of hard disks to data centres" and growing platinum consumption in the sector by 5% in 2020. 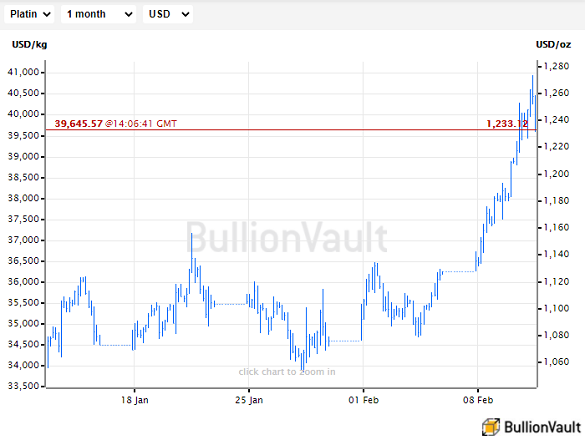 Short term for platinum prices however, and while "the band of congestion between $1060 and $1120 should act solid support," says O'Connell, "the most recent [up] move, with a 15% gain in just five days, is way over-extended and a correction must be on the cards."
Having recorded a "moderate deficit" between supply and demand for the 2nd year running in 2020, "For platinum the direction of the market balance will [now] depend on the behaviour of jewellery consumers and, above all, investors," says JM's new report, written before this week's worsening power cuts in South Africa, the No.1 PGM miner.
Yesterday's electricity outages in South Africa, imposed by state utility giant Eskom, have "added to the rally in the PGM sector," says O'Connell at StoneX, "[but] historically the miners have tended to be one of the sectors that has been ringfenced because of their importance to the economy.
"No shedding today, but vulnerabilities persist."
Silver demand is meantime forecast to grow by 11% overall this year from 2020, reaching the most since 2013 according to the Washington-based Silver Institute.
Silver today held little changed from last Friday's finish at $27 per ounce, while gold continued to trade 1.5% higher for the week so far at $1841.