END_OF_DOCUMENT_TOKEN_TO_BE_REPLACED

GOLD, SILVER and PLATINUM prices all rose again in Asia and London trading on Tuesday, gaining as US bond yields retreated, as did the Dollar, while inflation expectations held near their highest since 2014.
Gold and silver prices hit 1-week highs above $1845 and $27.50 per ounce respectively while platinum came within $5 of a 6-year high at $1192, with other platinum-group metals also rising yet further.
"[New US Treasury Secretary] Yellen talking about full employment by 2022 with $2 trillion in stimulus is driving the likelihood of a surge in inflation, which is good for gold," reckons said Tai Wong at Canadian finance group BMO.
The 10-year inflation rate forecast by bond-market prices today edged back 2 basis points from Monday's 6.5-year high at 2.22% per annum.
With the US currency down over 1% against its major FX peers from Friday's 2-month highs on the US Dollar Index, European stock markets failed to follow last night's fresh surge on Wall Street higher.
Shanghai gold prices meantime rose to ¥383 per gram, a near-record high in China when hit last May, keeping the premium for bullion landed in gold's No.1 consumer market around $8 per ounce above London quotes, reversing last year's record run of discounts and signalling solid demand ahead of Thursday's start to the week-long Chinese New Year holidays.
With platinum peaking near its highest since March 2015, just shy of August 2016's $1197 top, sister metal palladium meantime slipped from yesterday's 1-week high of $2367 per ounce.
Used primarily to reduce harmful emissions from gasoline engines – rather than in the diesel autocats which account for two-fifths of platinum use – the price of palladium rose 3.6-fold over the 5 years to 2020. Platinum prices fell by 15%. 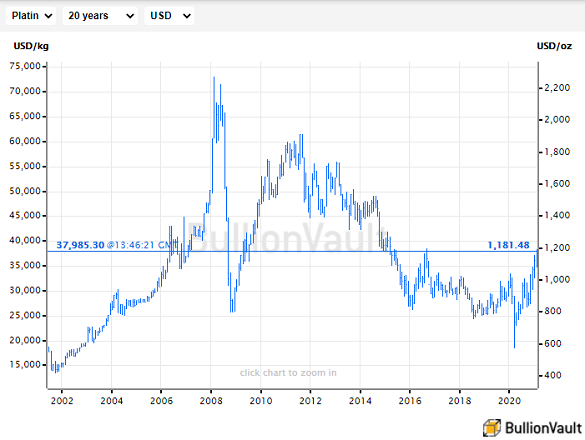 "Physical tightness continues to affect the PGM markets," says Jonathan Butler at Japanese conglomerate Mitsubishi, pointing to the recent strength in palladium plus multi-year highs in platinum and ruthenium as well as new all-time highs in rhodium and iridium.
"This tightness can partly be traced back to a severe drop in refined output in South Africa after Anglo's converter plant outage, and to the ongoing Covid situation, which has significantly reduced international flight availability and made it more difficult for refined metal to be shipped.
"Lingering tightness and price support can be expected over the medium term. However, the Chinese new year holidays will leave the PGM markets lacking crucial physical demand support and prices may drift lower – presenting dip buying opportunities for other industrial users."
Now the 2nd largest miner of PGMs after Sibanye (JSE: SSW), Anglo American Platinum (JSE: AMS) said last week it expects "a less volatile market" in 2021 as its processing plants come back on line, but rhodium's current supply shortage – with prices almost tripling from this time last year to more than $21,800 – is "unsustainable" according to CEO Natascha Viljoen.
"China's 6b emission limits are due in July 2023," says brokerage StoneX's chief analyst Rhona O'Connell, "[and new] vehicles will almost certainly be compliant well in advance.
"This is the obvious reason to believe there has been massive stockpiling [of rhodium in China]. The NOx emission limits...are due to be cut by 40%."
Outside of the PGMs, "Silver has been the rare focus of so much media attention over the past week," says US coin specialist Asset Strategies International, "[but] the spread between gold spot prices and premiums, and availability for delivery are in a very similar state.
"The fact is that fabricated precious metal coins and bars are in high demand and short supply."
Following the Reddit-inspired "short squeeze" attempt in silver of last week, the giant iShares Silver Trust (NYSEArca: SLV) yesterday saw investor selling liquidate 2.5% of its shares in issue, cutting the quantity of bullion bars needed to back its value by 507 tonnes, the heaviest 1-day outflow since at least July 2019.
Taking the ETF's backing down to 19,857 tonnes, that means over one-third of the record inflows spurred by r/WallStreetBets' call to "buy the $SLV and f**k the banks" has now been reversed.