END_OF_DOCUMENT_TOKEN_TO_BE_REPLACED

GOLD TRADING in London was quiet Tuesday, keeping prices in a tight $5 range as Western stock markets edged back from yesterday's new record highs.
With gold trading at $1475 per ounce, Euro-priced bullion ticked down to €1323.
UK gold prices in Pounds per ounce meantime recovered the last of last week's £35 General Election drop, trading back at £1122 as Sterling erased its bounce on the currency markets despite news that UK unemployment has  fallen near a 45-year low ahead of next month's Brexit from the European Union.
Longer-term interest rates also held in the middle of the last month's trading range, offering 1.86% annual yield to buyers of 10-year US Treasuries and a cost of 0.29% per year to buyers of German Bunds, thanks to negative yields.
Asian equities earlier closed Tuesday higher as Chinese officials voiced optimism for 2020 growth in the world's second-largest economy.
"Financial and geopolitical uncertainty combined with low interest rates will likely continue supporting gold investment demand," reckons investment research director Juan Carlos Artigas at the mining-industry backed World Gold Council.
More importantly, "Global monetary policy has shifted by 180 degrees" in 2019, Artigas goes on, with the US Federal Reserve cutting its key rate 3 times after forecasting further hikes at the start of this year.
"This is further supported by the surge in negative real-yielding debt," says the WGC analysis, "as evidenced by the strong positive correlation between the amount of debt and price of gold over the past four years." 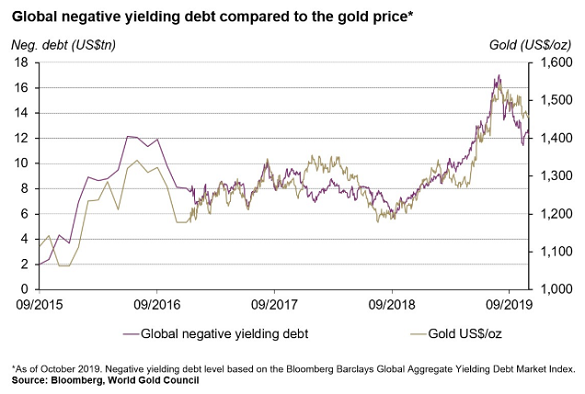 Back in Tuesday's headlines, "a host of known unknowns clouds the US-China trade deal," says Bloomberg, after Beijing failed to confirm Washington's claim that a 'phase one' agreement to roll back some of the import tariffs imposed on each other's goods since mid-2018 will be signed in January.
"Gold deserves its place in [a] portfolio as a hedge against the trade war re-escalating," says a note from analysts at US financial giant Citigroup.
Forecasting back at September's 7-year high in Dollar gold prices that the metal "could" reach $2000 by 2021, Citigroup last month repeated that forecast but slashes its New Year 2020 outlook from $1575 to $1485 per ounce.
With the Christmas shutdown now just a week away, London bullion traders meantime said activity was quiet on Tuesday, matching the last week's decline in US gold-proxy volumes.
Comex gold trading volume yesterday sank 51.7% from Friday's total, reaching the smallest number of gold futures and option contracts changing hands through the US-based exchange since at least August.
Gold trading volumes also sank across the top 2 gold ETFs listed in New York – the GLD from SPDR and IAU from Blackrock – down by nearly one-third on Monday from Friday's level.
Across the last 5 trading days, the quantity of gold represented by combined GLD and IAU volumes has fallen by 31.5% versus the last 52-week average.