END_OF_DOCUMENT_TOKEN_TO_BE_REPLACED

GOLD PRICES fell and rallied Friday as new US data said the world's largest economy added more jobs than expected in January, boosting expectations that the Federal Reserve will start or even intensify raising interest rates from the current Covid pandemic low of 0% at its next policy meeting.
Gold priced in the Dollar erased almost all this week's earlier 1.4% gains after the Bureau of Labor Statistics said non-farm payrolls grew by 467,000 last month, more than 3 times the consensus forecast from Wall Street analysts.
Average earnings also beat the Street, rising by 5.7% per year but still likely to be lagging inflation, reported for December at 7.1%.
The US Nasdaq index of tech stocks – together with which gold prices jumped during the 2020 lockdown phase of the Covid Crisis – then opened the day higher after sliding back towards last week's 7-month lows, widely seen as being driven by fears of higher US Fed interest rates and sinking yesterday after social-media giant Facebook's owner Meta (Nasdaq: FB) reported a drop in users and online retail giant Amazon (Nasdaq: AMZN) reported a drop in free cashflow.
Gold regained its drop in Dollar terms to head into the weekend at $1805 per ounce, a rise of $15 from last Friday's 5-week closing low.
European stock markets in contrast fell 1.2% for the day to erase this week's previous gains.
Euro gold prices meantime held onto this week's drop, heading for the lowest Friday close since mid-December at €1581, while the UK gold price traded flat overall at £1333 per ounce. 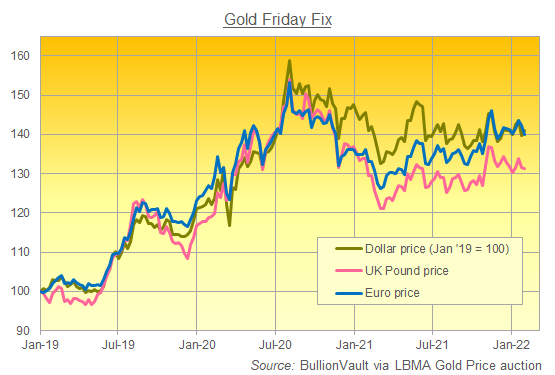 "Why should the [US Dollar] gold market care about pain in the [US] tech sector?" asks Nicky Shiels, strategist at Swiss bullion refiners and finance group MKS Pamp and the most consensus forecaster in this year's LBMA price prediction competition, calling for the precious metal to average $1800 per ounce in 2022 against the survey's average forecast of $1801.
"Extreme losses in 1 asset leads to losses in others (shoot first ask questions later), even if they are fundamentally not related.
"[But] gold, tech (Nasdaq) and Bitcoin are all negatively correlated with real interest rates and thus are sensitive to the Fed's hiking cycle & comments. [Although] arguably, tech is the 'new interest rate' proxy vs. gold the 'old interest rate' proxy."
Betting on a half-point hike at the Fed's March meeting jumped on Friday's jobs news according to data from the CME derivatives exchange, putting the odds of overnight rates being set at 0.5% or above at almost 1-in-4, nearly twice the level of Thursday.
Longer-term interest rates also jumped in the bond market, hitting the highest since December 2019 on 10-year Treasury yields at 1.89% per annum.
They bottomed near 0.50% in March 2020 and again that August, as gold prices hit their current all-time highs above $2000 per ounce.
Both UK and Eurozone government borrowing costs also rose sharply on Friday, extending this week's rise despite the split in central-bank policy over the outlook for inflation between the Bank of England and ECB.