END_OF_DOCUMENT_TOKEN_TO_BE_REPLACED

GOLD PRICES rallied but silver held near 1-week lows in London trade Thursday as the sudden 'risk off' turn taken by global financial markets yesterday continued following poor US economic data and mixed comments on fighting inflation with higher interest rates from 'doves'and 'hawks' at US central bank the Federal Reserve.
With gold briefly dipping to $1900 on Wednesday, the giant SPDR Gold Trust (NYSEArca: GLD) yesterday saw its first net inflow of investor cash so far in 2023, while the smaller IAU gold ETF saw its largest inflow since late-November, adding 2.5 tonnes of bullion to back their shares between them, equal to 0.2% growth.
Gold priced in the Dollar today recovered to $1910 per ounce but was little changed below €1770 for Euro investors and held 1.4% beneath Monday's approach of record UK gold highs at £1580 in terms of the British Pound.
More industrially-useful silver meantime held onto yesterday's $1 drop for the week so far, trading at $23.45 per ounce – and hitting 7-week lows against the Japanese Yen – as global stock markets fell for a 2nd day, snapping an 8-session gain on the MSCI World Index.
That had been the longest such run of daily stock market gains since February 2021.
"The combination of severe risk-off sentiment, [Wednesday's] bounce in the US Dollar, and some hawkish [Fed] comments is a toxic mix for the white metals," says a note from Swiss bullion refining and finance group MKS Pamp, noting that industrially-useful silver, platinum and palladium "reacted by quickly reversing [a brief] rally...probing 5-day lows."
Crude oil today fell further from Wednesday's 6-week high, dropping almost 4% to trade below $79 per barrel of US benchmark WTI after the Paris-based International Energy Agency said China's post-lockdown recovery will see global demand rise to a new record high this year, but with a surplus of supply over demand in the first 3 months.
Inflation expectations in the bond market meantime held at the weakest in 2 years after the gap between yields on conventional and inflation-protected US Treasury debt slipped yesterday to 2.12% per annum on 10-year bonds and 2.09% on 5-year bonds.
Running since 2003, those 'breakeven' rates are down 0.9 and 1.5 percentage points respectively from last spring's series-record highs. 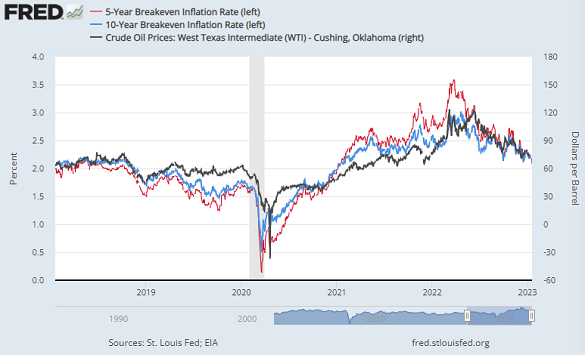 Wednesday's raft of poor US economic data for December saw the S&P500 index of US corporate equity plunge by 1.6%, the stock market's steepest 1-day drop in a month.
Wholesale prices in the world's largest economy fell by 0.5% last month from November, the steepest drop since April 2020's Covid Crash when economic activity shutdown worldwide.
US retail sales also sank however, dropping harder than analysts expected with a 1.1% fall despite the small retreat in the headline cost of living figures released last week.
Industrial output also fell hard in December according to Wednesday's US data releases, marking the steepest drop since September 2021 with a 0.7% monthly decline despite input costs falling for the 6th month running on the Producer Price Index of commodities.
But "We're not quite there yet," said James Bullard, president of the St.Louis Fed, in an interview with the Wall Street Journal yesterday.
"Policy has to stay on the tighter side during 2023."
"Things are moving in the right direction," agreed Loretta Mester, president of the Cleveland Fed, to the AP news-wire, "[but] above 5% is going to be needed I think given where my projections are for the economy.
With US Fed rates now at a ceiling of 4.50%, that means "We need to keep going."
More 'dovish' comments came from Lorrie Logan of the Dallas Fed and Patrick Harker of the Philadelphia Fed – both of whom are also 2023 voting members on the US central bank's decision committee – looking to "slow the economy modestly" but repeating their commitment to defeating inflation.
"[Yesterday's] weak retail sales report does not change expectations that the Fed will likely increase rates by 0.25% during the upcoming meeting," MarketWatch quotes one US economist.
Fewer than 1-in-20 bets on the Federal Reserve's 1st February rates decision now see the US central bank raising by half-a-point, down from 1-in-3 at New Year according to the CME derivatives exchange's FedWatch tool.
More than 9-in-10 bets on December's decision meantime see the Fed holding rates unchanged or cutting the cost of borrowing by year's end.
"[The gold price is] due for a bigger correction here," reckons one futures brokerage's market strategist, quoted by CNBC.
"We're going to see a retracement [and] gold could sell off maybe $150 from here and again become a buying opportunity."
The Dollar meantime stabilized Thursday, trading unchanged from last week's 7-month lows, after yesterday's decision by the Bank of Japan to make no change to its 'yield curve control' policy of massive government bond purchases spurred sudden volatility in the Yen and other major currencies.