END_OF_DOCUMENT_TOKEN_TO_BE_REPLACED

GOLD PRICES in London spiked down to 3-week lows and silver dipped below $22 on Friday as longer-term interest rates edged upwards again after reaching multi-month and multi-year highs this week, but both precious metals then rallied back to unchanged for the day after new data said the US economy added only half as many jobs as expected in December.
Following Wednesday's private-sector ADP Payrolls estimate of 807,000 jobs growth for last month, the Bureau of Labor Statistics today said the world's largest economy saw net hiring of just 199,000 compared to analyst forecasts of 400,000.
Gold prices fell to $1783 per ounce on the news – some $3.50 below the 2-week lows hit after notes from the US Federal Reserve's December policy meeting said Wednesday that the world's most important central bank is worried enough by inflation reaching 3-decade highs to start tightening its historic pandemic stimulus much sooner.
Silver prices meantime dropped 20 cents to trade below $22 per ounce for the first time since the Fed's December announcement before rallying straight back from that new 3-week low as gold prices regained $10.
Priced against silver, 1 ounce of gold yesterday reached 81.3 ounces of the gray metal based on London's benchmark bullion prices, the highest Gold/Silver Ratio since end-October, before edging back below 81 in Friday's trade.
The Gold/Silver Ratio jumped to new all-time peaks above 120 as the Covid Crash of March 2020 crushed the more industrially-useful precious metal to its cheapest since New Year 2009, nadir of the Lehmans Crash phase of the global financial crisis. 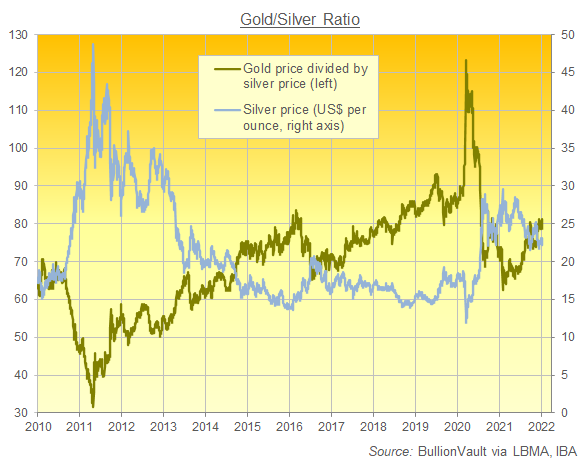 Here in New Year 2022, "Gold should sniff lower," said a trading note from Swiss refining and finance group MKS Pamp ahead of today's US jobs data, "but it's holding relative to both the massive move in real yields and vs silver."
Real interest rates – meaning the yield on 10-year inflation-protected US Treasury bonds – were little moved on today's BLS non-farm payrolls report, having slipped back to -0.80% per annum overnight from Thursday's jump to -0.73%.
That had marked a 1-week rise of almost 1/3rd of a percentage point, the steepest such rise since the Covid Chaos of March 2020, when inflation expectations crashed together with commodity prices and financial markets, sending real interest rates on TIPS sharply higher.
"With real 10-year yields at the highest since the [Fed's QE] taper [announcement] in June 2021, [our] model-implied gold price is $1734," says MKS.
"[So] gold is either holding up relatively well...due to physical demand, preemptive index buying, continual ETF buying, or fresh investor buying ahead of expected Fed policy mistake [in raising rates too quickly and hurting growth]...or there's further downside."
The largest gold-backed ETF product, the SPDR Gold Trust (NYSEArca: GLD), yesterday shrank by 0.1% but held on track for a 2nd consecutive weekly inflow.
The smaller iShares gold ETF (NYSEArca: IAU) did not change in size Thursday, but showed 0.2% expansion for the 1st week of January 2022 so far.
Silver's giant iShares product (NYSEArca: SLV) in contrast has now shrunk to its smallest since July 2020, with shareholders liquidating 3.3% of the ETF since New Year's Day.
Thursday's slump in bullion prices came as trading volumes in precious metals derivatives leapt on the CME's Comex exchange, with the combined number of futures and options contracts reaching the highest since late-November with gold volumes up 33% and silver 82% on the previous day.
Overnight, the retreat in global gold prices saw the premium for metal landed in Shanghai – entry-point for all bullion going into China, the world's No.1 gold consumer nation – more than doubling today from Thursday's level to reach $6.50 per ounce.
On a weekly basis however, and with end-January's Chinese New Year shopping and gift-giving sprees in doubt as lockdowns are re-imposed across Covid-19's source country, the average incentive for new bullion imports to China from London fell to $4.20, easing from $7.62 and the smallest in 6 weeks.
"Customer footfall at Zaveri Bazar, [India's] largest gold market, has reduced by 20-25% as Covid cases are climbing up," says Ashish Pethe, chair of the All India Gem & Jewellery Domestic Council, speaking to the Economic Times earlier this week.
As a result, "There is a dip in bullion buying by jewellers of almost 25%" in gold's No.2 consumer market compared to last week, he says.
Euro gold prices on Friday dipped below €1580 per ounce for the 2nd time this week even after new data put inflation across the 19-nation currency union at the highest since it was formed in the late-1990s, while No.1 economy Germany's rate hit a 3-decade high of 5.7%.
Despite this week's surge in longer-term interest rates, energy prices have continued to rise, with US crude oil reaching 2-month highs above $80 per barrel on Friday as European gas prices were widely seen driving what UK newspapers are now calling a "cost of living crisis".
Gold for UK investors fell more steeply still, hitting 2-month lows at £1320 per ounce after new data said house prices in the world's 5th largest economy rose almost 10% across 2021, with activity in the construction sector also holding strong in December despite the Bank of England raised its key interest rate for the first time since mid-2018, albeit by only 0.15 points to 0.25%.
Western equity markets meantime slipped overall after Asia closed the day flat, with US tech stocks edging down 0.2% from Thursday's fresh 2-week lows and the wider S&P500 index heading for a loss since the end of 2021.
The first week of the year has matched the direction of the following 12 months in 16 January's since 2000.