END_OF_DOCUMENT_TOKEN_TO_BE_REPLACED

GOLD and SILVER PRICES jumped, fell and then bounced back on Tuesday after the fastest reading for US inflation in 3 decades boosted the Dollar and caused fresh confusion in the bond market.
June's headline rate of US consumer-price inflation hit 5.3% per year, the highest annual pace since July 2008, when crude oil touched its current all-time highs near $150 per barrel.
Crude oil was barely half that price today, with gold holding above $1800 and silver prices whipping through $26 per ounce once again.
On the 'core' measure excluding volatile fuel and food, June 2021's consumer-price inflation hit 4.6% per year, the highest annual rate since November 1991 and driven by used cars and trucks, new vehicles, airline fares, and apparel according to the US Bureau of Labor Statistics.
On a shorter-term basis, core CPI rose 0.9% from the month before. This means that each of April, May and June 2021 came in the top 10 most inflationary months of the last 4 decades.
They also marked the fastest calendar quarter for US inflation since Q3 1981, with the cost of living rising 2.5% from the end of March.
That compares with an average quarterly rise of 0.5% so far since 2000. 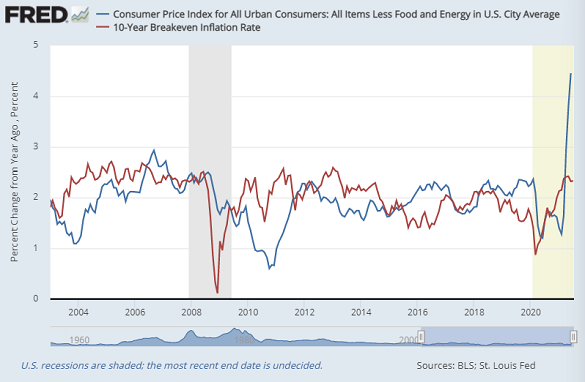 Bond-market prices, however, continued to signal lower inflation ahead, with the gap between 10-year conventional and 10-year TIPS yields suggesting a breakeven rate of 2.36%.
While the highest since mid-June, that market-implied inflation rate is markedly below early May's 8-year high of 2.54% per annum.
The action in bond markets is "confusing many," says a note from Swiss bullion refiners and finance group MKS Pamp, "given the stark dislocation between a market holding onto the inflation trade on one hand (commodities [speculation] is very long, equity prices/valuation [is] high), while signaling disinflation on the other (fixed income)."
Tuesday's inflation data saw US stock markets open slightly lower after the S&P500 index set yet another fresh all-time high.
With the Dollar rising on the FX market, European stock markets then recouped their earlier drop, helping Germany's Dax index rise towards new back-to-back all-time highs.
Euro gold prices touched their highest in a month at €1536 per ounce, and the UK gold price in Pounds per ounce extended a £10 rise above the £1300 level.
Today's inflation data saw US Dollar gold prices move $50 inside an hour only to end up little changed at $1812 per ounce.
Silver prices also whipped higher and lower but failed to get back to unchanged after dipping below $26 per ounce yet again – a level it has moved up or down through on all but 2 trading days since 17 June.
Ahead of today's US inflation data, as well as Federal Reserve chairman Jerome Powell's regular testimony to Congress starting Wednesday, the giant GLD gold-backed ETF yesterday saw its 6th net outflow of investor cash in 7 trading days, shrinking the trust fund to its smallest size in 7 weeks.
Competitor US gold ETF the IAU was meantime unchanged in size, keeping it also at the smallest since late-May.