END_OF_DOCUMENT_TOKEN_TO_BE_REPLACED

GOLD and SILVER PRICES extended yesterday's sharp gains on Tuesday, reaching 3-week and 3-month highs respectively against a falling US Dollar as global bond markets rallied and stock markets leapt amid expectations of a "Fed pivot" on raising interest rates.
"We should not be wishing for that," says Mohamed El-Erian, former CEO of bond giant Pimco and now chief economic adviser to its parent, German insurance group Allianz.
"If the Fed pivots it's because we've had either an economic accident or a market accident."
US manufacturing activity was barely changed in September from August, the ISM PMI survey said Monday, with pressure from prices paid by purchase managers slumping to the weakest since June 2020 and factory employment shrinking for the 4th month in six.
Across the US economy, the number of job openings sank in August at its fastest pace since the 2020 Covid Crisis new data said today, dropping to the fewest in more than a year.
Friday this week will bring the official non-farm payrolls estimate and unemployment data for September from the Bureau of Labor Statistics. 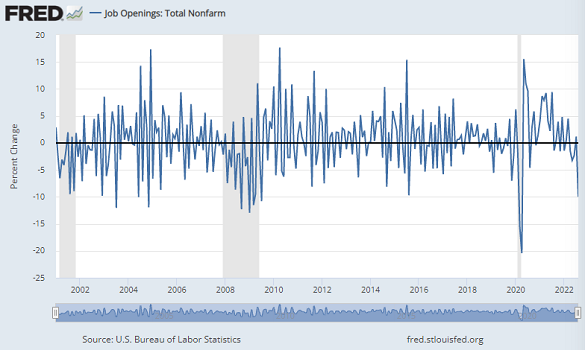 "As a result of slowing growth, I anticipate the unemployment rate will rise," said New York Fed president John Williams in a speech last night.
"Tighter monetary policy has begun to cool demand and reduce inflationary pressures. But our job is not yet done," Williams went on, repeating last week's view from fellow Fed official Lael Brainard that "policy will need to be restrictive for some time" to stem the surge in the cost of living.
Despite the Fed's protestations of further rate hikes ahead – and despite betting on November's Fed decision continuing to back a fourth consecutive 0.75-point hike – the Dollar fell Tuesday to a 2-week low on its trade-weighted index against the rest of the world's currencies, retreating by 3.0% from last Tuesday's fresh 2-decade high.
Gold priced in the Dollar rose above $1710 per ounce, its highest since 13 September and $100 per ounce above late-September's 2.5-year low.
Physical silver prices meantime touched $21 per ounce 4 times during London trade, adding $3 per ounce from Wednesday last week.
Trading volumes in Comex silver futures contracts yesterday almost doubled from Friday's level, reaching the highest in 3 weeks according to data published by the CME.
Open interest, in contrast, grew by just 2.1% to a 1-week high.
Giant silver-backed ETF the iShares product (NYSEArca: SLV) meantime ended Monday unchanged in size, holding at its largest in 4 sessions after expanding across September for the first time in 5 months.
The MSCI World Index of developed-market equities meantime jumped Tuesday by 3.0% as the end of European trading drew near, cutting its year-on-year plunge to 22.6%.
Major government bond prices also rose sharply again, pushing down 10-year borrowing costs towards 2-week lows for the USA at 3.57%, fully 0.4 points below last Tuesday's spike to 2011 levels.
Commodities also rose – as did so-called crypto-currency Bitcoin – as crude oil broke back above $90 per barrel of European benchmark Brent on growing expectations that the Opec+ cartel of producer nations will agree sharp cuts to output when they meet this week.