END_OF_DOCUMENT_TOKEN_TO_BE_REPLACED

SILVER BARS traded in London's wholesale market outperformed a rising gold price on Tuesday, briefly reaching 6-week highs above $24 per ounce as base and other industrial metals set fresh all-time records amid a supply squeeze hitting the London Metal Exchange.
Gold bullion bars recovered the $1780 level, erasing half the drop from last Thursday's 4-week peak at $1800 per ounce.
Copper bars for immediate delivery meantime held strong after breaking above $11,000 per ton for the first time ever yesterday at the LME, surging ahead of future settlement prices amid what Bloomberg calls "a critical shortfall in available inventories".
Large silver bars traded in London's wholesale market have now risen 7.0% from end-September's 14-month low.
Gold bullion has risen less than half as fast, and now shows 0% change from this time a decade while silver shows a 25% loss and industrial metals – as tracked by the LME Index – a 30% gain. 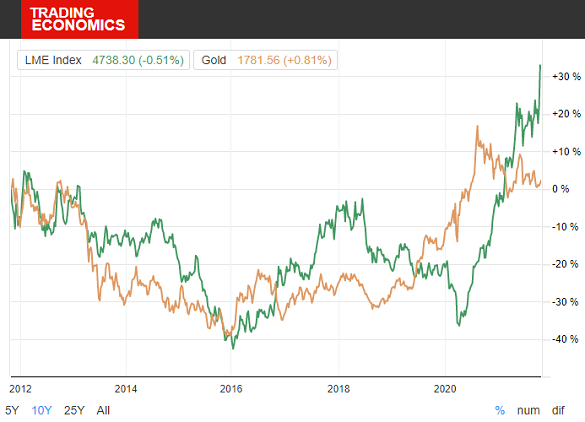 "People are not persuaded enough [by inflation] to go very long on gold," says Nicholas Frappell, global general manager at gold and silver bar refinery ABC Bullion.
"Macro investors for instance don't seem to be persuaded to buy more gold to hedge inflation."
"Demand in Shanghai remains robust" however says Swiss refiner MKS Pamp, pointing to a solid premium over London gold bar prices of $8 per ounce and also noting strong demand in Asia for silver.
Copper's available stockpiles at LME warehouses has sunk by almost 90% this month, Bloomberg reports, "driven by a steady flow of orders to take metal out of European depots.
"And while the record spot premiums should typically start attracting metal back into the warehouse network, there’s little sign of that happening so far."
Natural gas prices today edged lower again in Europe from their recent records, but crude oil held firmer with Brent above $84 per barrel and US WTI holding 7-year highs.
European government bond prices slipped once more in contrast, edging Germany's 10-year borrowing costs up towards last week's 5-month high of minus 0.09% per annum.
UK borrowing costs meantime rose within 5 basis points of last week's 2.5-year high of 1.20% per annum on 10-year debt, and comparable US Treasury yields edged back above 1.60% once again.
"Wall Street strategists who thought the coast was clear for bets on lower Treasury yields are abandoning ship after the market moved against them in a global bond selloff," says Bloomberg, pointing to a switch of advice from Canada's TD Bank and the UK's Barclays.
Yesterday's surprise drop in US industrial production, down 1.3% for the month in September, was followed Tuesday by a steeper-than-expected drop in new home-building permits.
"We believe that the US entered recession again around June 2021," says a new paper from former Bank of England policymaker David Blanchflower and fellow economics professor Alex Bryson, looking at consumer confidence ratings from the summer.
"[But] global monetary and fiscal policies are no longer outright supportive of gold in the US or globally," says a note from bullion bank HSBC. "With the era of ultra-loose monetary policies coming to an end and fiscal stimulus being pulled back, gold investment is down."
Platinum prices meantime fell back Tuesday, with wholesale bars of the primarily industrial precious metal shedding all but $10 of an overnight $25 rally towards $1060 per ounce – an 11-week high when reached last Thursday.