END_OF_DOCUMENT_TOKEN_TO_BE_REPLACED

GOLD and SILVER prices both rallied and fell back from yesterday's highs in London trade Wednesday, retreating from 1-week and 6-week highs respectively as global stock markets rose for a 6th session running but base metals and energy commodities finally snapped their surge as one major market tried to address the post-pandemic supply-chain crunch.
A wider retreat in the US Dollar's FX rate meantime saw the 19-nation Euro rise as Germany's central-bank chief Jens Weidmann – famously the most 'hawkish' policymaker at the European Central Bank – announced he will stand down at end-December after 10 years running Buba.
"It's a good measure of time to turn over a new leaf – for the Bundesbank, but also for me personally," Weidmann said as Germany's bond prices also tracked a wider rally in Eurozone government debt, helping edge borrowing costs lower from this week's multi-month highs.
Tracking a peak and retreat from $1788 today, gold priced in the Euro hit €1535 before losing €10 per ounce while silver hit almost €20.80 before dropping back 25 cents.
Together that took the Gold/Silver Ratio down below 74, making gold the cheapest in terms of silver since the beginning of August.
Widely seen as a barometer of financial fear when rising vs. economic confidence when falling, the ratio leapt to set all-time historic highs above 120 amid the commodity-price crash of March 2020's Covid Crisis.
"The Gold/Silver ratio may have topped, with scope for a free-fall to 70.00," claimed technical chart analysis from German financial services group Commerzbank last week. 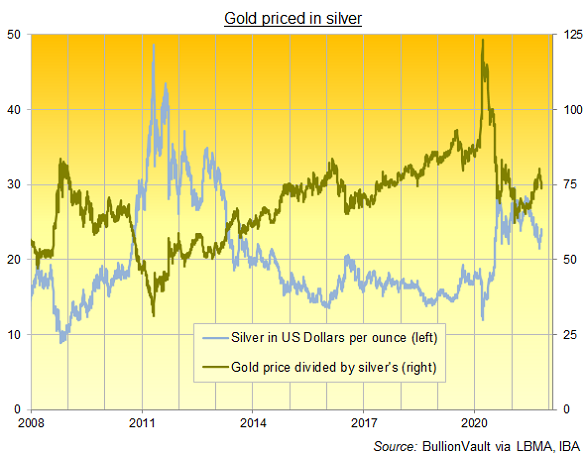 Zinc traded in Shanghai meantime lost 6.5% on November futures on Wednesday, and copper fell over 1.0% in London after global trading hub the London Metal Exchange imposed price limits and invited large holders to loan it their inventory, boosting supply with LME warehouse stockpiles now the smallest since 1974.
The LME is rumored to be scrapping its gold and silver futures contracts, launched to much fanfare in 2017 but attracting zero trading volume pretty much ever since.
Crude oil also fell Wednesday, dropping almost $1.50 from Monday's new 3-year high, after new economic data showed the rebound in Japan's exports of goods slowing hard in September.
UK consumer prices rose less quickly than analysts expected for September, slowing to 3.1% annual inflation. But UK factory input inflation accelerated to 11.4% per year for September – the fastest pace since the 1st anniversary of the 2016 Brexit referendum crashing the Pound on the FX market.
Gold priced in British Pounds today rose from and fell back to £1289 per ounce, some 20% above their mid-2016 peak.
German factories meantime paid 14.2% more last month than a year before on Destatis' producer price index.
That's the fastest input-cost inflation since the 1973-74 global oil crisis.
Global auto-giant Volkswagen (ETR: VOW3) is currently making the fewest cars since 1958 at its home plant of Wolfsburg, German media claim, thanks to global parts and especially micro-chip shortages.
"While most [mined industrial commodity] markets are in deficit in 2021," says Julian Kettle, senior vice president at analysts Wood Mackenzie, "the majority are not markedly so, with most having adequate stock levels.
"Looking forward [and] absent major supply disruptions, markets are set to tip into surplus, some substantially so.
With current prices offering miners "heady margins" on accelerated output, "Gravity is going to start dragging the supercycle rocket back down to earth very quickly," Kettle concludes – "at least for long enough to refuel for the multi-decade stellar journey that will be the energy transition.
"Lower prices will precede the real start of the supercycle from mid-decade onwards."
Back in the equity market meantime, and despite Wednesday's continued rally, the MSCI World Index has now gone over 6 weeks without setting a new closing record, the longest such stretch since mid-Feb to end-March.
The index had recorded 14 new all-time highs over the previous 31 trading days.