END_OF_DOCUMENT_TOKEN_TO_BE_REPLACED

GOLD and SILVER PRICES rose on Monday against a falling US Dollar as speculators cut their bets on the US Fed hiking its key interest rate by one full percentage point at next week's July meeting, writes Atsuko Whitehouse at BullionVault.
Speculators also reduced their bullish betting on gold last week, cutting it – net of that group's bearish bets – to neutral overall, while becoming yet-more bearish against silver on Comex futures and options.
After recording a 5th straight week of losses to touch 11-month lows beneath $1700 per ounce, spot gold prices rallied on Monday morning by 0.9% to $1723 before easing back.
But gold and silver prices were both flat for UK and Euro investors as the Dollar pulled back from 20-year highs on the currency market.
"The yellow metal has bounced back after twice finding support in the $1700-area last week, supported by profit taking on long Dollar positions," says derivatives platform Saxo Bank's strategy team.
The US Dollar Index – a measure of the US currency's value versus its major peers – dropped for the 2nd consecutive session on Monday, extending Friday's pullback from near fresh 2-decade high.
With overnight US interest rates now at a ceiling of 1.75%, "I would now say that we may have to try to hit 3.75% to 4% by the end of 2022," said voting Federal Reserve member James Bullard of the St.Louis Fed on Friday.
"[But] moving too dramatically can undermine a lot of those things that are working well," said non-voting member Raphael Bostic of the Atlanta Fed, warning that a shock from interest rates could derail economic growth. 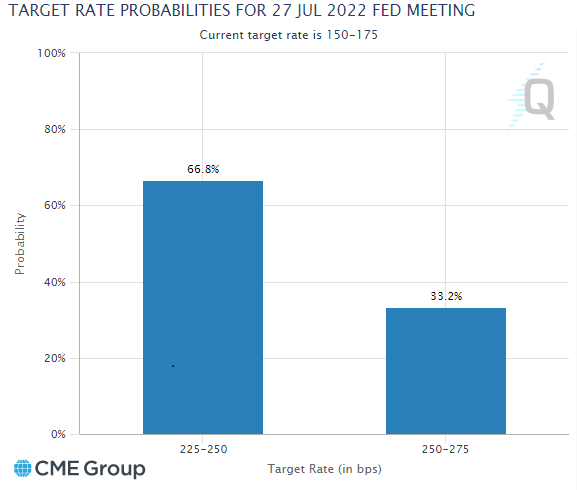 According to derivatives exchange the CME's FedWatch Tool, traders in Fed Funds futures today priced in a 30% probability of a full percentage-point rate rise at next week's meeting.
That was down from 80% last Wednesday, when US CPI data showed inflation hitting new 40-year highs above 9% per annum.
Fed policymakers are now in their traditional period of silence ahead of the upcoming FOMC meeting and vote.
For gold prices, "Central bank hawkishness has been already priced in," reckons one FX advisory, "and with gold holding on to $1700 per ounce last week, we may see shorts get squeezed a bit."
Latest data from US regulators the CFTC show that hedge funds and other leveraged speculators in Comex gold futures and options cut their bullish betting further in the week-ending 12 July, down to the smallest since November 2018 while that group also grew its bearish betting.
Overall, that pushed the net long position of Managed Money traders to near neutral, the smallest since April 2019. 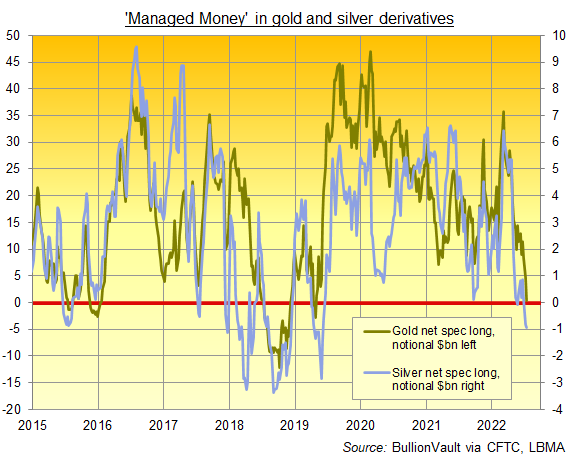 Speculators meantime raised their net bearish betting against silver to the strongest in 3 years and built their net short position against platinum prices to the strongest in a year.
Prices for silver, primarily an industrial metal, rose 0.4% to $18.80 per ounce on Monday, recovering some of its 7th straight weekly losses to new 2-year lows.
Platinum, which finds two-thirds of its demand from industrial uses, led by auto-catalysts, jumped 1.3% to $864 per ounce, while sister-metal palladium – of which Russia is the No.1 miner – climbed 2.4% to $1877 per ounce.
The price of crude oil rose on Monday after US President Joe Biden, came away from talks in the Middle East without an agreement on raising supply.
Brent crude rose 2.6%, after falling lower for the 5th consecutive week amid concerns over a global recession, falling by 1/6th since the highs around $130 a barrel hit in March during the early weeks of Russia's war on Ukraine.
With a heat wave scorching the western half of Europe today – and with sanctions-hit Russia keeping the key Nordstream pipeline to Germany on maintenance – European natural gas prices also rose Monday as the continent's worst energy crunch in decades saw electricity demand for air conditioning jump.
European stock markets advanced however on Monday, with the Euro Stoxx 600 index adding another 1.3% to last week's gains.
The European Central Bank has vowed and is expected to hike interest rate for the first time in 11 years on Thursday, most likely by 0.25%.
In the face of inflation hitting a currency union record of 8.6% per year, that will still leave the ECB's base rate – now held at minus 0.5% since 2019 in nominal terms – deeply negative in real terms.