END_OF_DOCUMENT_TOKEN_TO_BE_REPLACED

GOLD and SILVER BULLION prices retreated from yesterday's 6-week highs on Tuesday as London's physical market returned from the long Easter weekend, the US Dollar rose to its strongest on the currency markets since the Covid Crisis of March 2020, and longer-term European interest rates hit their highest in almost 7 years.
With Russia intensifying its assault on eastern Ukraine's Donbas region as the French finance minister claimed the European Union is preparing to ban imports of Russian crude oil, that pushed the Dollar price of large wholesale gold bars settled in the world's storage and trading hub back to $1967 per ounce, down by $30 from Monday's peak.
Global stock markets meantime dropped yet again after Friday and Monday's European shutdowns saw the MSCI World Index lose value once more, slipping to a new 1-month low overnight while commodity prices retreated and longer-term interest rates rose to fresh multi-year highs in the bond market.
With inflation across the developed Western world hitting 3- and 4-decade highs, the UK government's 10-year borrowing costs neared 2.0% per annum today as Prime Minister Boris Johnson faced demands in Parliament to resign over breaking his own Covid lockdown laws and lying about it.
Germany's 10-year Bund yield – which was below zero as recently as early March – meantime rose to its highest since 2015, peaking above 0.9% per annum, as new Chancellor Olaf Scholz faced yet more criticism over being "too hesitant" in imposing sanctions against Moscow and reducing imports of Russian oil and gas. 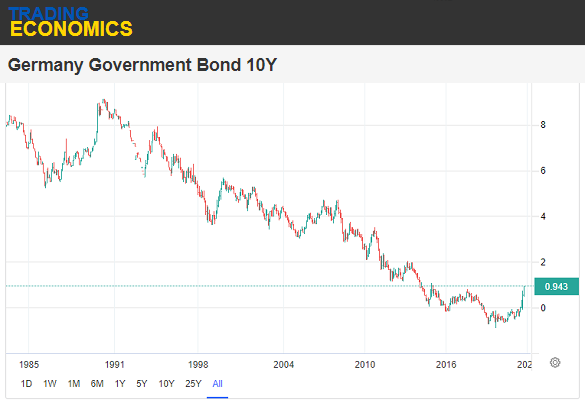 With France's benchmark government bond yield also at the highest in 7 years, "I hope that in the weeks to come we will convince our European partners to stop importing Russian oil," said France's Bruno Le Maire today, claiming that the push is being led by President Macron – now facing anti-Nato and anti-EU challenger Marine Le Pen in next weekend's second-round ballot.
Gold was firmer but also slipped in other major currencies as the Dollar rose, dropping below £1515 in UK Pounds, retreating to €1820 in Euros but setting yet another fresh all-time record in Yen – touching almost ¥8,175 per gram – as the Japanese currency fell to a new 2-decade low on the FX market.
Silver also retreated against the rising Dollar but by less than gold, slipping 0.9% from its Easter Monday high after breaking above $26 per ounce for the first time since 11 March.
China's stock market had earlier led Tuesday's global equities losses, cutting 0.8% off the CSI 300 index and 2.3% off the Hang Seng despite the People's Bank unveiling 23 measures to try easing credit conditions in the world's 2nd largest economy.
The moves "echoed a similar list of policies released in February 2020, at the height of the initial Covid outbreak," says Bloomberg.
With Covid lockdowns now shuttering major cities, manufacturing zones and ports, the CSI 300 index has lost almost 30% from February 2021's record high.