END_OF_DOCUMENT_TOKEN_TO_BE_REPLACED

GOLD PRICES rallied from a brief dip below $1340 per ounce in London trade on Tuesday, rising against a firm US Dollar as New York traders returned from the long Presidents Day weekend.
With China's markets still closed for the New Year of the Dog celebrations, Asian stock markets closed lower while European equities edged higher.
Benchmark UK Gilt yields rose above 1.60%, up near their highest since April 2016, as the British Pound fell back below $1.40 against the Dollar – an 18-month high when reached in late-2017 and a level last seen before the mid-2016 shock Brexit referendum result.
Offering what he called "reassurance" over the UK's March 2019 exit from the European Union, the Government's chief negotiator David Davis today said the country won't be "plunged into a Mad Max-style world borrowed from dystopian fiction."
Platinum prices meantime held and rose above $1000 per ounce
Silver rebounded 1.1% to regain last week's closing level at $16.66 per ounce.
"With China still on leave," says the latest trading note from Swiss refining and finance group MKS Pamp, "there was little interest in Asia to stop bullion moving through the recent support level of $1345.
"[But drops] remain shallow...[and] should we see further Dollar appreciation, expect to see support broadly around $1330-35."
With the bulk of end-2017's regulatory filings now complete, latest data say that the largest exchange-traded gold proxy – the SPDR Gold Trust (NYSEArca:GLD) – ended last year with institutional and fund investors holding 40% of its shares, the largest proportion since the Brexit referendum shock of mid-2016. 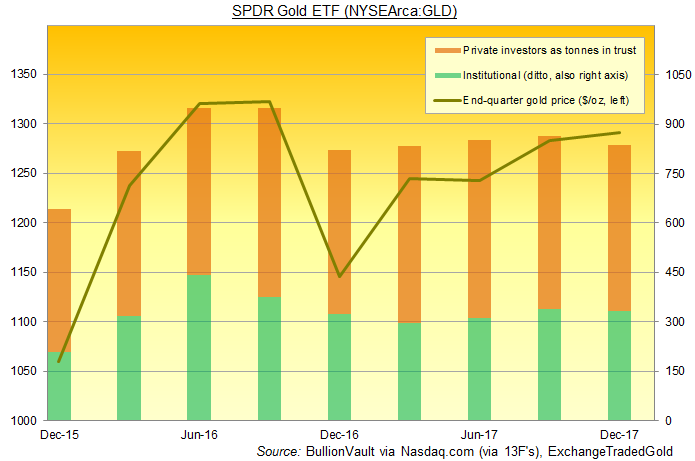 That contrasts with the largest silver ETF, the iShares Silver Trust (NYSEArca:SLV), which had 16.3% institutional ownership at end-2017.
"Silver crossed below the lower level of the Ichimoko cloud," says a technical analysis from Belgian refining group Umicore.
"The next stop might be the support level at $16.35 or the current annual low at $16.13."
But this is only "a limited pullback," counters technical analyis from French investment bank Societe Generale, "[and] $16.38-16.20 should contain it."
"Demand and supply fundamentals are improving," adds SocGen bullion market analyst Robin Bhar, "and we expect demand to exceed supply in 2018, primarily driven by a significant shortfall of primary mine production (down 10%)."
"People are scratching their heads wondering why silver isn't picking up along[side] gold," says exchange-traded trust fund provider ETF Securities' Maxwell Gold.
"[But] rising global growth is going to have a much bigger impact on silver going forward."