END_OF_DOCUMENT_TOKEN_TO_BE_REPLACED

GOLD erased all but $10 of this week's earlier $45 gains in London trade Friday, slipping to $1840 per ounce as silver prices also fell with the wider commodities market amid worsening Covid infection rates and lockdowns worldwide.
Western stock markets also fell, down almost 1% by lunchtime across Europe on average, as did longer-term interest rates in major government debt markets.
Inflation expectations also fell, cutting 10-year breakeven rates implied by index-linked US Treasury bonds to 2.09% per annum from the 27-month high of 2.12% hit on Wednesday's inauguration of Joe Biden. 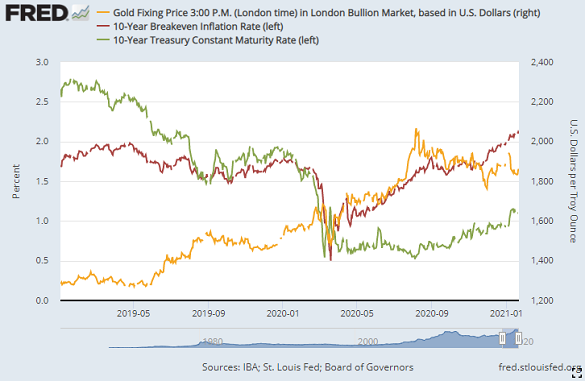 Silver prices today slipped within 7 cents of $25 per ounce – down a Dollar from yesterday's 2-week highs – but then bounced to hold 1.9% higher from last Friday night's finish.
Both the largest silver and gold-backed ETF investment funds saw no change in size Thursday, keeping the giant SPDR Gold Trust (NYSEArca: GLD) at its smallest since New Year's Eve, while the iShares Silver Trust (NYSEArca: SLV) stayed at its largest since Pfizer's Covid vaccine announcement of early November after Tuesday's jump in the SLV made for the heaviest weekly inflows in 6 months.
Across the ETF markets as a whole, "Silver holdings have now reached a record," says broker StoneX's chief analyst Rhona O'Connell in a note to clients.
"This reflects silver getting both gearing to gold on the back of the expectations for hefty stimulus [plus] levering also off the expectations for economic recovery."
Pushing for $1.9 trillion in new stimulus and already signing two dozen executive orders aimed at stalling and addressing the pandemic since taking office Wednesday, new US President Joe Biden will sign 2 more on Friday, both boosting the flow of benefit payments.
France needs its citizens "to take care of each other" President Macron told students protesting against the loneliness and anxiety caused by its lockdown and 6pm curfew on Thursday, while the UK's current lockdown may continue into the summer said Prime Minister Johnson, with late-June's Glastonbury music festival now already cancelled.
Over in Spain – now heading for "de facto" lockdown as Covid cases set new daily records – the coalition government is meantime facing "increasing strains" reports the Financial Times over state-pension reforms demanded by the European Union in return for giving Madrid €140 billion from the EU's €672.5bn Covid Recovery and Resilience Facility, the 2nd largest chunk after Italy.
To fund the program, "a barrage of debt from the European Union risks chipping away at future demand for its member states' bonds," says a column at Bloomberg.
"Podemos is not going to vote in favour of a pension cut in Spain," says Pablo Iglesias, deputy prime minister and leader of the left-wing 'Yes we can' party.
But "Unity saves companies, unity saves jobs, and without a doubt, it saves lives," said Prime Minister Pedro Sánchez of the Socialist Workers' Party on Thursday, vowing to meet the EU's requirements.
On top of pushing back the state pension age, "At least 37% of each [member state's] plans has to support the green [energy] transition and at least 20% digital transformation," says the European Parliament's provisional agreement from December.
"The evolution of hybrid and battery-electric vehicles [may see] nearly 90 million ounces of silver absorbed annually in the automotive industry by 2025," said a new report from the Washington-based Silver Institute last week.
Equal to nearly 12% of 2020's silver-mine output, such use would "rival" the flow of silver into photovoltaic cells for solar energy – "currently the largest application of global industrial silver demand."
The jump in silver ETF investing is "not a function of price [but of] expectations for hefty stimulus [and] economic recovery over the course of this year, notably in the automotive and solar power sectors," says O'Connell at StoneX.
For silver prices, "The uptrend looks safer than that of gold."
" Pension system reform is imperative" in China, says an article from consultancy KPMG published this week by a Beijing-backed think tank.
"Public pensions are the main pillar, accounting for about 74% of the total [provision...and creating] a huge challenge to maintain sustainability as China ages more quickly over the next 30 years."
The world's most populous country and now its 2nd largest economy, China will in fact become "an aged society" in 2022 says research group Evergrande, with 1-in-7 people 65 or older, up from 1-in-10 just 2 years ago.
Leaked proposals for slowly raising China's official pension age from 60 for men and from as low as 50 for women sparked "fury" on social media app Weibo late last year, with angry comments asking "What's the benefits of this policy for ordinary people? Who are those experts behind the policy proposal?"