END_OF_DOCUMENT_TOKEN_TO_BE_REPLACED

GOLD PRICES rose to new 4-week highs against a weakening Dollar in London trade Tuesday, adding over $100 per ounce from mid-July's test of the precious metal's post-Covid Crisis lows as global stock markets fell amid growing calls for the US economy to be recognized as in 'recession' plus worsening US-China tensions over Taiwan.
With Nancy Pelosi, Speaker of the US House of Representatives, due to visit Taipei tonight despite protests from the Communist dictatorship in Beijing – which claims Taiwan as part of China – the Taiwanese government said it had come under cyber attack, while "several" Chinese fighter jets buzzed the independent island nation's air defences.
"Escalating US-China tensions boost demand for safe havens," claims a headline at Bloomberg, pointing to 3 consecutive days of net inflows to gold-backed ETF trust-fund products after 21 sessions of uninterrupted liquidation by shareholders.
Gold priced in the Dollar rose for the 4th session in a row on Tuesday, touching $1785 per ounce and also edging higher again in UK Sterling and Euro terms.
With commodity prices falling again meantime, rising government bond prices today pushed longer-term interest rates lower again, edging 10-year US Treasury yields down to their lowest in 4 months at 2.54% per annum – dramatically below mid-June's decade high of 3.49%.
The falling 10-year yield has now dropped within 0.1 percentage points of 3-month Treasury rates, the tightest such yield-curve spread since March 2020 marked the deepest US recession since at least World War 2.
An inversion of 10-year over 3-month rates has preceded each of the last 8 economic recessions as designated by the National Bureau of Economic Research.
Every time that the 10y-3m spread has inverted over the last 6 decades, the Federal Reserve has also stopped raising and started to cut its key Fed Funds interest rate. 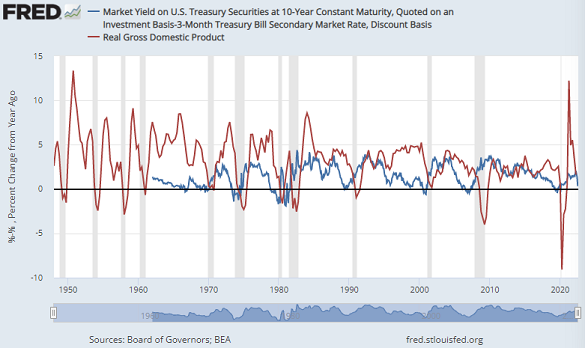 "The economy is not in the jaws of a recession," reckons US investment bank Raymond James' chief investment officer, Larry Adams, telling clients that the NBER probably won't declare such a downturn because unemployment is just 3.6% – near the lowest since 1969 – while the Q2 drop in GDP included a sharp fall in product inventories, "worked down to more normal levels [after the Covid Crisis and] a sign that consumers are still buying."
"[But] the 'two-consecutive-quarters' metric has had no false positives since 1948," says Robert J.Barro, Professor of Economics at Harvard University.
"If one takes the eventual NBER verdict as truth, one must also accept that two consecutive quarters of negative real GDP growth have consistently forecasted a recession for the past 74 years."
Betting on interest-rate futures now sees a 4-in-5 chance that US Fed will hike by only half-a-point at September's meeting, according to derivative exchange the CME's FedWatch tool.
That's the heaviest showing in 4 weeks, and up from below 1-in-3 after mid-July saw rate-hike forecasts jump – and gold prices sink – following a new 4-decade high in US consumer-price inflation data.
"Gold could push a little higher towards mid-$1800s," reckons analyst Edward Meir at brokerage ED&F Man – now being bought by London-based competitors Marex – "because the Dollar will continue to weaken over the course of August as a lot of the macro numbers in the US are starting to look worse.
"If things continue to deteriorate the Federal Reserve could maybe stop raising rates at some point to let the economy heal. More importantly, in Europe and China, we could start seeing some kind of stimulus spending."
New data yesterday said that US manufacturing activity held firmer than analysts expected in July, but input costs sank on the ISM's prices paid index.
Faced with the highest consumer-price inflation since the early 1990s at 6.1%, the Reserve Bank of Australia today raised its key interest rate by half-a-point to 1.85%.
New data on Tuesday showed that Aussie mortgage lending already sank 3.3% per month in June with the number of new building permits issued falling 17.2% from the same month last year.