END_OF_DOCUMENT_TOKEN_TO_BE_REPLACED

GOLD PRICES rallied further on Thursday, erasing this week's previous 1.4% drop in Dollar terms as the US currency retreated once more on the FX market ahead of next week's expected slowdown in Federal Reserve rate hikes, helping New York equities push higher despite a rise in longer-term interest rates in the bond market.
Silver also gained once more, rising back towards last week's highs above $23 per ounce, a level not seen since May.
With Dollar gold prices touching $1790 per ounce, Euro priced bullion edged back up to €1700.
The UK gold price in Pounds per ounce also erased the last of its previous 1.0% drop for the week, trading at £1465.
"Further weakening of the Dollar as inflation recedes could provide support for gold," says a 2023 outlook from the mining industry's World Gold Council, while "a mild recession and weaker earnings have [also] historically been gold-positive.
"[But] long-term bond yields are likely to remain high [and] pressure on commodities due to a slowing economy is likely to provide headwinds to gold in [the first half of the year]."
Australia's GDP growth and China's latest import/export data both missed analyst forecasts on Wednesday, but economic growth across the Eurozone showed less of a slowdown than expected for the July-September quarter at 2.3% per year while jobs growth accelerated to 1.8% per year.
Poland's central bank held its key rate unchanged at 6.75% for a 3rd month running yesterday after inflation slipped back to 17.4%, while Brazil stuck at 13.75% with inflation now down to 6.5%.
Facing inflation of 6.9% per year – down from June's 4-decade peak of 8.1% – the Bank of Canada meantime raised its key interest rate by half-a-point to 4.25%, ending a run of 0.75-point hikes.
The same slowdown from 0.75 to half-point rate rises is also expected in next week's decisions from the European Central Bank and the Bank of England on Thursday, and before them the US Federal Reserve on Wednesday. 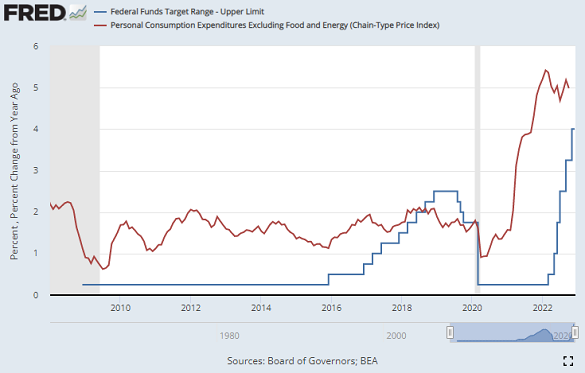 "Monetary policy is adjusting to ensure that high inflation does not become entrenched, and that inflation returns to 2% over the medium term," said ECB president Christine Lagarde in a speech today, noting how those rate rises – plus "a weakening economic outlook [and] an array of powerful shocks" including the Covid pandemic, Russia’s invasion of Ukraine, and the energy crisis – led the central bank in September to issue its first 'general warning' over financial stability in the 350-million citizen currency union since 2010.
With German police searching for more suspects in the far-right Reichsbürger movement's apparent plot for an armed coup against the elected government – a left-leaning coalition now marking its first year in office – the Dax share index has fallen 2.0% so far this week, twice as hard as France's benchmark Cac40.
Rolling back its 'zero Covid' restrictions despite a surge in new cases meanwhile, world No.2 economy China yesterday said for the first time in more than 3 years that its central bank has added gold to its bullion reserves, with the People's Bank reporting 32 tonnes' growth over November, defying analysts and pundits who believe Beijing has been a key buyer in what may have been record central-bank gold demand worldwide in July-to-September this year.
The central bank in India meantime approved use of hedging contracts in the world No.2 gold consumer's new free-trade zone, enabling importers and exporters to protect their inventory against sharp price moves.
Repo contracts and loan/lease products are also coming soon to the new India International Bullion Exchange, Ashok Gautam – managing director and CEO of the IIBX – told attendees of the London Bullion Market Association's annual seminar.
New LBMA data say that silver stockpiles in London shrank for the 12th month running in November, taking the quantity of wholesale bars vaulted in the world's central trading hub down 1.4% to a new series low at the smallest since at least mid-2016 amid a record year for fabricated silver product demand.
Taking London silver bullion inventories down 28.8% from mid-2021's peak, last month's outflow of 364 tonnes was however the smallest drawdown since February.