END_OF_DOCUMENT_TOKEN_TO_BE_REPLACED

GOLD PRICES tried but failed to rally much from yesterday's $25 drop after the US Federal Reserve signalled it is about to start tapering its monthly QE bond-buying, with interest rates now forecast to start rising from zero in 2022.
Briefly regaining last week's drop from $1785 per ounce as the Fed's latest policy statement and economic projections were released, the gold price in US Dollars then sank to $1760 before reaching $1776 only to drop back $10 again in London.
Silver prices were also volatile, trading in a 65-cent range and holding just 60 cents above Monday's new 2021 low of $22.04 per ounce as New York trading re-opened Thursday.
"If progress continues broadly as expected," the FOMC said in its statement, "the Committee judges that a moderation in the pace of asset purchases may soon be warranted" – a sentence widely taken to mean tapering will begin in November.
Starting from the current $120bn per month of new QE and bond buying, "a gradual tapering process...concludes around the middle of next year," Fed chair Jerome Powell then said in his post-statement press conference.
This "slight hawkish tilt...did not surprise investors," Reuters quotes Bank of China International's head of commodities markets strategy Xiao Fu.
"But once reductions in asset purchases start, gold could face moderate headwinds, with prices moving towards $1700 or even lower."
"Gold initially broke up through $1780," says a trading note from Swiss refiners and finance group MKS Pamp's Nicky Shiels, pointing that that "old support / new resistance", but the "subsequent wakeup call and reversals was the more appropriate response to the Fed." 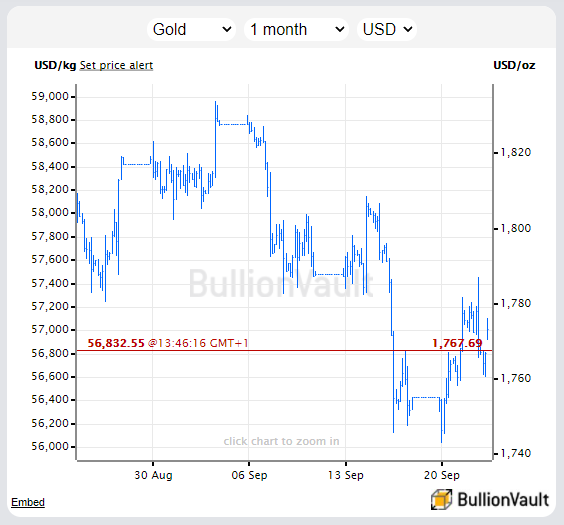 Despite Powell recently denying any link between the end of QE and the timing of a rate hike from zero, yesterday's 'dot plot' forecasts from the Fed's policymaking team now predict 1 rate rise in 2022 (none in June's projections) with another 3 following in 2023.
That first move still won't come until June at the earliest, said betting on interest-rate futures this morning, but the odds of rates not being raised at all by the end of next year fell to 30% from 39% this time yesterday and 47% a week ago.
Out in the secondary market for Washington's $23 trillion of outstanding debt, America's yield-curve flattened meantime, with shorter-term rates rising but long-dated rates slipping.
Both 2-year and 5-year Treasury yields rose today to their highest since July at 0.25% and 0.88% per annum respectively.
Ten-year yields were unchanged at 1.33% and Washington's 30-year debt offered just 1.83% to new buyers, slipping to the lowest return since mid-July.
Annual inflation in the US cost of living was 5.3% last month.
Gold prices edged lower overnight in Asia, but the Shanghai premium over London quotes held solid around its historic average of $8 per ounce.
Both Euro and UK Pound gold prices also gave back last night's spike on the Fed announcement, trading below last weekend's levels against €1505 and £1287 respectively.
Global commodity prices were meantime mixed, with crude oil retreating but natural gas's big surge making fresh headlines across the European media as more 'discount' UK energy providers went under.
Stock markets rose in China and Europe after the debt-laden Evergrande real estate group said it's reached a deal with some domestic bondholders but still faced trying to make a separate payment due to foreign investors.