END_OF_DOCUMENT_TOKEN_TO_BE_REPLACED

GOLD PRICES jumped to new multi-month peaks near the highest in 2021 so far for Euro and UK investors on Friday as the Dollar gold price tried yet again to hold a break above $1800 per ounce in the face of strong US jobs data.
The Dollar gold price twice tried that level around the start of US trading today.
Silver prices meantime tried but fell back again from $24.00 per ounce for the 4th time this week.
Non-farm payrolls in the world's largest economy added 531,000 jobs last month, pulling the unemployment rate down to 4.6% on the Bureau of Labor Statistics' figures – the lowest since March 2020, when the global Covid pandemic took hold across the USA.
With consensus forecasts predicting 425,000 jobs growth, October's total non-farm employment rose within 3% of February 2020's record high on the BLS report. 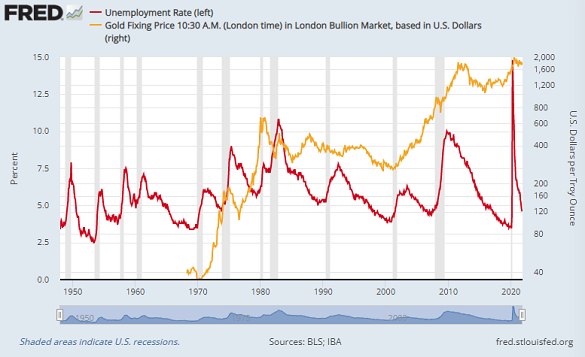 Ahead of Friday's NFP data, gold priced in the Dollar touched $1800 for the 5th time in 4 weeks, rallying $40 per ounce from Wednesday's 1-month low.
That was touched just before the US Federal Reserve confirmed that it will now – as clearly signalled and expected – taper its new quantitative-easing money creation and bond buying by $15 billion per month from the monthly pace of $120bn in place since December last year.
Dropping back to $1785 in volatile trading around today's jobs data, the Dollar gold price then rebounded to $1803, its highest in 6 sessions.
The UK gold price in Pounds per ounce also rose sharply, reaching a fresh 3.5-month high above £1339 as longer-term UK interest rates continued to fall in the bond market following the Bank of England's surprise decision yesterday not to raise its overnight Bank Rate from the record low of 0.10% first imposed as the government put the country into its first Covid lockdown in March last year.
Gold priced in the Euro meantime broke above €50,000 per kilo for the first time in a week and touched its highest since end-May at €1564 per Troy ounce.
Like the UK gold price, that put the cost of buying bullion with Euros at the top of 2021's trading range.
US Dollar prices, in contrast, remain right in the middle of their high-low move. 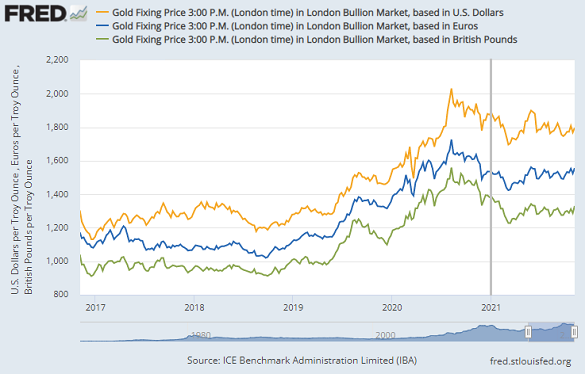 Data for retail sales across the 19-nation Eurozone today surprised analysts by showing a fall for September from August, forced by rising Covid cases and led by a drop in Germany.
"Europe is once again at the epicentre of the Covid pandemic," says the BBC, quoting the World Health Organization (WHO) and its new forecast that the continent could see 500,000 more deaths by February.
In the USA, "daily average of cases [have] hovered around 72,000 infections for the past two weeks as outbreaks smolder," says NPR, "particularly in the northern half of the country" ahead of the Thanksgiving holidays.
Pharma-giant Pfizer (NYSE: PFE) today announced successful trials of an "experimental antiviral pill" for Covid-19, apparently showing near-90% effectiveness in preventing hospitalization.
Sending shares almost 10% higher at the start of New York trading, the news kept the stock below August's fresh all-time highs but 2/5ths higher from this time 12 months ago, when Pfizer announced the first successful Covid vaccine, helping crush gold prices by $100 per ounce in a day.
"We expect gold prices to retreat in 2022 as economic recovery develops," Reuters today quotes analysts at Australasian bank ANZ.
With gold having become "an extremely frustrated market" capped by $1800 at the top, says a trading note from Swiss refining and finance group MKS Pamp, "it's [now] all about markets dialing back their rate-hike expectations after [the US] FOMC but especially after the shock hold by the BOE."
Western government bond prices extended their post-Fed gains Friday, driving longer-term borrowing costs lower.
Ten-year US Treasury yields fell below 1.50% per annum for the first time in a month, and comparable German yields sank to minus 0.27%, more than 1/5th of a percentage point below last Friday's 29-month high.
European and North American stock markets rose as borrowing costs retreated, but Asian equities had earlier fallen – led by Shanghai's CSI300 index losing 1.3% for the week – as heavily indebted Chinese real-estate company Evergrande (HKG: 3333) faced another interest-payment deadline and shares in smaller rival Kaisa Group (HKG: 1368) were suspended in Hong Kong after it missed a repayment.