END_OF_DOCUMENT_TOKEN_TO_BE_REPLACED

GOLD PRICES recovered from $1160 per troy ounce, a 19-month low yesterday. The Dollar indexed against a basket of major currencies, fell for a second day from a 14-month high on Wednesday, amid the US threatening to impose more economic sanctions on Turkey if it does not free a detained American pastor.   It is still set to make a weekly drop of 2.8% however, writes Atsuko Whitehouse at BullionVault.

Turkey has taken advantage of the United States for many years. They are now holding our wonderful Christian Pastor, who I must now ask to represent our Country as a great patriot hostage. We will pay nothing for the release of an innocent man, but we are cutting back on Turkey!

The Turkish lira is under pressure again, falling nearly 7% against the dollar and at one stage hit 6.24, now trading at 6.04, down 4% on the day.

One currency trader told that the weakness of the lira was driven by the “new US sanctions threat and the S&P decision, with position-closing in markets ahead of the public holiday”.

Standard & Poor’s is expected to downgrade Turkey’s sovereign credit rating after markets close today. Next week, the Turkish markets will be closed for Eid al-Adha, the Festival of Sacrifice, from Tuesday until Friday.

Gold futures volumes have surged on the Borsa Istanbul this week as the volatile currency attracts speculation and after the lira’s plunge boosted the local price of the metal. The 90-day average daily volume more than doubled to 40,000 contracts, from about 17,000 in March. During the same time, the value of an ounce of gold in lira rocketed more than 30 percent.

“It definitely would make sense to own gold now in Turkey given the depreciation of the lira,” Jonathan Butler, precious metals strategist at Mitsubishi Corp U.K. Plc, said. “This is consistent with gold’s status as a safe haven and will likely be mirrored on the physical market with demand increasing for jewellery and gold bars.”

Asian stock markets jumped today with Japan in the lead, but Chinese shares slid as US President Trump prodded Beijing to offer more at the bargaining table in their first major negotiation planned in more than two months.

“We’re talking to China, they very much want to talk,” said Trump at a cabinet meeting at the White House yesterday. “They just are not able to give us an agreement that is acceptable, so we’re not going to do any deal until we get one that’s fair to our country."

The mid-level talks between the US and China will likely be about "how exactly are they going to deal with the RMB (renminbi)," said Robin Brooks, chief economist at the Institute of International Finance, referring to another name for the yuan.

After falling to a one-year low, the offshore yuan on Thursday surged the most since January 2017 as the Chinese central bank set its daily fixings at stronger than expected levels.  The central bank has set stronger-than-expected yuan fixings for seven days in a row.

Emerging-market stocks steadied after a seven-session sell-off, the MSCI Emerging Markets index gained 0.15% after tumbling 19.5% from a peak in January.  A 20% drop is generally considered to represent a bear market.

The largest gold-backed ETF, the giant SPDR Gold Shares (NYSEArca:GLD) shrank 12.8 tonnes to 773 tonnes.  It declined 3.2% this week and has not gained since 27th July. 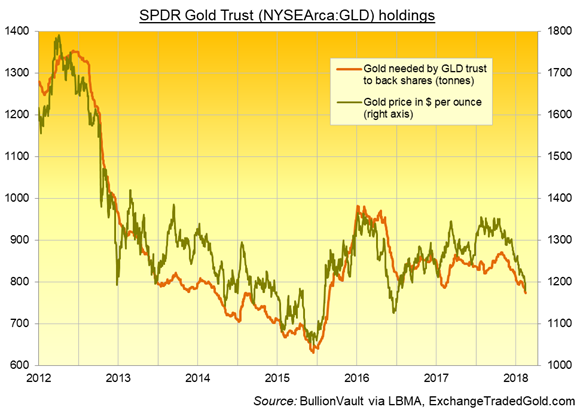 Palladium fell dramatically to $834 yesterday dropping 7.3% for the day but climbed back to $900 today so the weekly decline is 1.3% at London lunch time.