END_OF_DOCUMENT_TOKEN_TO_BE_REPLACED

GOLD PRICES rose back above $1960 per ounce in London on Wednesday, trading 3.2% higher for the week so far but trailing yesterday's fresh all-time peak of $1981 as the global pandemic of novel coronavirus continued to worsen and world stock markets struggled to rally from yesterday's drop ahead of today's monetary policy announcement from the US Federal Reserve.
New York Comex futures lagged behind London physical prices on both the July and August contracts, while September showed a $4 premium and futures for December delivery held $15 per ounce higher than that.
"I wondered yesterday whether [Tuesday's] correction in gold might lead to some ETF profit-taking," says strategist John Reade at the mining industry's World Gold Council.
But "Nope" he says, pointing to Bloomberg data showing a 23rd consecutive day of expansion for gold-backed ETF trust fund products as a group worldwide.
"Not much of a correction yet, sitting above $1950," says chief analyst Rhona O'Connell at brokerage StoneX.
"Still way overbought and needs to come back further."
"The chart is calling for some correction on the back of overbought signals," agrees another London dealing desk. "But CTAs [Commodity Trading Advisors, money managers almost exclusively betting through derivative contracts] have not turned [bearish] yet thanks to a weaker US Dollar and stalling equities, whilst macro traders are waiting to hear from the US Fed."
Latest data say that Managed Money traders in Comex gold futures and options last week grew their bullish betting on gold to the largest size since late April. 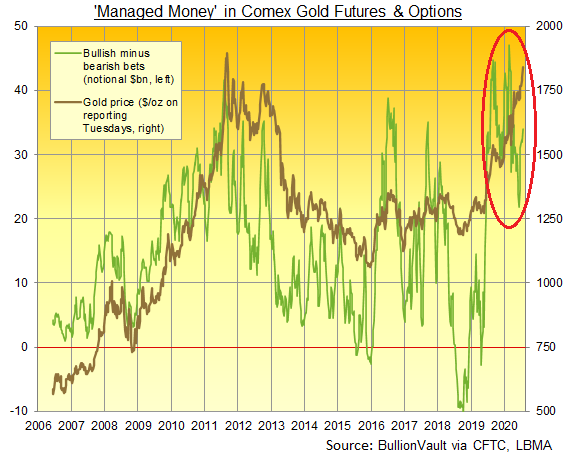 Up 3.8% as of last Tuesday from a week earlier, the Managed Money's net speculative long position stood 54.7% larger than its average size of the last 10 years, but it was still 36.9% below the record set last September.
More notably, that net speculative position remained smaller from New Year, down by 30.0% even as the US Dollar gold price showed a 21.0% gain from the start of January.
Shrinking by more than 135,000 contracts, the Managed Money's net speculative long position has never before fallen that hard as gold prices rose.
Also breaking all previous patterns, "Comex gold inventories have risen almost exponentially," says O'Connell at StoneX, dating this surge in stockpiles of gold warehoused in or around New York to when the gap in US futures prices over London bullion prices "blew up" in April as the shutdown of international flights "meant it was [percetived to be] difficult to get metal into New York" – a view soon proven wrong by record inflows of bullion bars to US warehouses.
With Comex inventories now 817 tonnes larger than at New Year, combining that growth with gold ETF and also central-bank demand so far in 2020 gives a total of 1,884 tonnes for large-bar investment flows, O'Connell tells clients of StoneX.
"Last year the total was 1,076 tonnes...so that's an increase of 808 tonnes physical into these 3 categories, and we are only just entering August."
After the Federal Reserve yesterday said it's extending its Covid-19 emergency lending programs through to 31st December 2020, "The Fed likely discussed moves it can take at its September meeting" rather than looking to make a big change to rates or QE today, reckons CNBC.
"[But] Fed chairman Jerome Powell is expected to reinforce that the Fed will do whatever it can to help the economy and labor market heal."