END_OF_DOCUMENT_TOKEN_TO_BE_REPLACED

GOLD PRICES rallied but failed to hold above $1100 per ounce in London trade Thursday, dropping below that level for the fourth time this week after breaking that new 5-year low on Monday.
Silver held firmer, keeping the Gold/Silver Ratio – the simple measure of their relative prices – beneath 74, well below this month's new 6.5-year high of 77 ounces of silver per 1 ounce of gold. 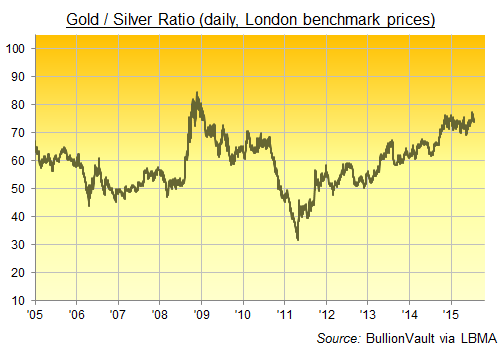 Asian stockmarkets closed Thursday higher but European equities fell as the single Euro currency rose to 1-week highs against the Dollar above $1.10 on the FX market.
That pushed gold prices for Euro investors back below €1000 per ounce, a 15-month high when reached amid the return of the Greek debt crisis this January.
Writing "to anyone who’s still bullish on gold," an op-ed column at MarketWatch says that gold prices " clearly peaked above $1900 an ounce back in 2011.
"Since then, its trend has been down...a secular, or long-term, bear market. The last secular bear market for gold lasted 20 years."
"Established arguments explain gold's current bear market," says precious metals analyst Robin Bhar at French investment and bullion bank Societe Generale, pointing to "tightening" US monetary policy, a rising Dollar, lack of inflation, falling oil prices, a retreat in the "fear factor" around geopolitical risks, better yields on other assets, bearish trends on gold price charts, and a "reduction in emerging market physical demand."
Chinese gold imports likely totaled some 107 tonnes in June, says analysis from Australian bank Macquarie – "down from 134 tonnes in May...the lowest since September...[but] hardly a weak number" against 60 tonnes in the same month last year.
Over in India – now the world's No.2 consumer nation behind China – "The steep fall [in gold prices] has created fresh pressure on bullion dealers and jewellery manufacturers," said India Bullion and Jewellers Association president Mohit Kamboj at a press conference yesterday, warning how "severe stress" from anti-gold government policies is now being compounded by a tightening of bank credit to the industry in response to the price drop.
"Despite still weak demand seasonally," writes senior strategist Koen Straetmans at the multi-asset team of $218 billion Dutch investment managers NN IP – switching to 'overweight' precious metals and cutting positions in agricultural commodities – "prices may find price support in the near term.
"Indian physical demand improved somewhat on an above average Monsoon in June. US retail coin sales also rose in June, while some 'safe haven' demand can equally be expected in China [if] the Chinese stock markets take another leg down."