END_OF_DOCUMENT_TOKEN_TO_BE_REPLACED

GOLD PRICES edged briefly back above $1350 in London Tuesday lunchtime, recovering an overnight drop of $13 per ounce but failing to re-test Monday's failed attempt at making fresh 2-year highs as world stock markets fell, bond prices jumped, and the British Pound sank to new multi-year lows despite a vow that the Bank of England's post-Brexit plan "is working".
US Treasury bond prices rose to push the yield offered by 10-year debt down to new all-time lows at 1.36% per annum.
Gold priced in Yen struggled to hold last week's finishing level as the Japanese currency also rose with the Dollar on the FX market, as did the 'safe haven' Swiss Franc.
Swiss government bond prices rose so high, the yield offered to new buyers fell below zero on all of Bern's debt, including on 30-year and 50-year bonds.
"The Bank has a clear plan," said Bank of England governor Mark Carney at a press conference today, again inviting a contrast with Westminster's lack of political leadership following the Brexit referendum while presenting the central bank's latest Financial Stability Report.
"We are rapidly putting its main elements in place," Carney said as he announced a £150bn cut in the UK banking sector's total required reserves. "And it is working."
The Pound then fell below its Brexit crash lows however, dropping to its weakest level in 3 decades versus the Dollar and the lowest level against the Euro since October 2013, losing almost one-fifth from last summer's 8-year highs.
One chart in the Bank of England's new report today shows UK household debt surging from 50% of income in 1980 to 132% in 2016.
The UK's current account deficit with the rest of the world has also yawned to record levels, although Carney said the collapse in Sterling "should" help to reduce it as imports become more expensive and exports more competitive overseas. 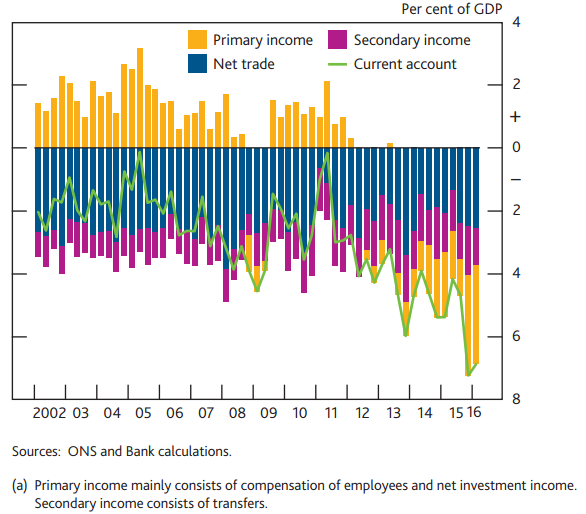 Monday saw insurance and asset-management giant Standard Life suspend redemptions from its £2.9bn ($3.8bn) UK property fund, which last week led a write-down of values across the sector, blaming the Brexit vote for spurred investor selling.
Back in the gold market, China's premium over London quotes fell to $2 per ounce in Shanghai on Tuesday, its lowest level since the discounts of Brexit Friday and Monday on 24 and 27 June.
"The government is allowing speculation by providing cheap financing," said respected independent China economist Andy Xie, speaking last week to MarketWatch.
"[China] is riding a tiger and is terrified of a crash. So it keeps pumping cash into the economy. It is difficult to see how China can avoid a crisis."
Silver trading in Shanghai today leapt once more, again overtaking volumes in the SGE's main gold contracts amid what several commentators have said is just the latest in a series of speculative bubbles for China's household savers and traders.
After spiking to a sudden 2-year high above $21 per ounce in Asian trade Monday, silver prices retreated 4 times faster than gold overnight in Asia today, dropping more than 4% against the Dollar before rallying slightly to recover last week's closing level at $19.76 per ounce.
"The [Bank of England] has previously highlighted the risks from rapid credit growth in China," said the new report from Mark Carney's team in London today.
"Though policy stimulus measures look to have stabilised the economy in the near term, that has been associated with even more rapid growth of credit, increasing financial fragility over the medium term."