END_OF_DOCUMENT_TOKEN_TO_BE_REPLACED

GOLD PRICES retreated Thursday, dropping $20 per ounce from yesterday's stab at new 6-year Dollar highs, as world stock markets edged higher following New York's new all-time record close.
Falling 1.5% from Wednesday's peak, gold traded at $1413 by lunchtime in London.
Ahead of tomorrow's key monthly US jobs data, New York meantime stayed shut for Thursday's Fourth of July celebrations.
"The good news, at least for gold, is that public, private and corporate debt around the world has skyrocketed, the business cycle is maturing, and equity market risks and higher volatility are also in the cards," writes Canadian brokerage TD Securities' Bark Melek in the latest edition of the Singapore Bullion Market Association's quarterly magazine Crucible.
"Since gold is very much a diversifier and a traditional portfolio hedge, money managers will allocate more gold to their asset mix when opportunity costs relative to Dollar-denominated equities fall, correction risks increase, and the demand for insurance assets grows."
Right now however, "It's a little hard to label it as a flight to quality type of bid," notes Mark Heppenstall, chief investment officer of $20bn Penn Mutual Asset Management, "as the stock market is at record highs."
The S&P500 hit a new record high, up 19% for the year, noted US President Trump ahead of today's Fourth of July Independence Day celebrations.
"We have the greatest economy anywhere in the world. We have the greatest military anywhere in the world. Not bad!" he went on.

Today's Stock Market is the highest in the history of our great Country! This is the 104th time since the Election of 2016 that we have reached a NEW HIGH. Congratulations USA!

"I love gold," says legendary emerging-market investor Mark Mobius, advising a holding of at least 10%.
"Interest rates are going so low, particularly now in Europe," he said. "What's the sense of holding Euro when you get a negative rate? You might as well put it into gold, because gold is a much better currency."
Italian bond yields bounced Thursday from yesterday's plunge on news that IMF chief Christine Lagarde will succeed Mario Draghi at the European Central Bank, rather than German Bundesbank 'hawk' Jens Weidmann.
But German, Dutch, French, Japanese and Swiss bond prices rose again, driving the interest rate they offer to buyers still further below zero.
"The amount of negative-yielding debt globally is on the rise," says John LaForge, Head of Real Asset Strategy at US bank Wells Fargo's advisory division.
"In turn, investors have bought gold and other alternative currencies as hedges against potential deflation." 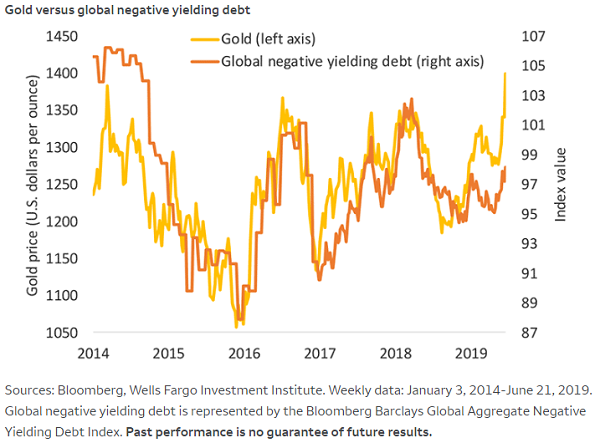 "Interestingly," LaForge goes on, "gold prices have risen faster than the amount of negative-yielding debt.
"[So] we believe either gold prices above $1400 are too high, or the world needs to brace itself for more negative-yielding debt to come."
Over in China on Thursday, Shanghai gold premiums – compared to London quotes – held well north of $10 per ounce yet again, extending the run of strong incentives for new imports into the world's No.1 gold consumer nation to 10 weeks.
"China and Europe playing big currency manipulation game and pumping money into their system in order to compete with USA," Trump also tweeted overnight after naming two 'low-rate' economists to join the US Fed's monetary policy team.
"We should MATCH, or continue being the dummies who sit back and politely watch as other countries continue to play their games – as they have for many years!"
After US factory orders showed a greater-than-expected drop for May in Wednesday's data, that month's retail sales in both Australia and the 19-nation Eurozone missed analyst forecasts on Thursday.