END_OF_DOCUMENT_TOKEN_TO_BE_REPLACED

GOLD PRICES set fresh 2018 lows for the third day running in London trade Thursday, dipping below $1286 per ounce as US bond prices continued to fall, pushing longer-term interest rates up to yet more 7-year highs.
The rising US Dollar also pushed the Euro currency back down near this week's drop to the lowest level since December.
Gold prices then rallied $5 as world stock markets gained, the Dollar edged back, and bond prices steadied – pulling 10-year US Treasury yields back down from 3.10% – on a surprise rise in the number of people starting to claim US jobless benefit payments.
Adjusted for market-expectations of inflation, the real 10-year yield has risen this week above 0.9%, a level touched on only one day since May 2011.
That day, in September 2013, saw gold prices extend a rally from the Spring's historic crash as weak US jobs data then raised doubts over the Fed's timeline for starting to 'taper' the size of its monthly quantitative-easing bond buying.
Real yields have shown a strongly negative relationship with Dollar gold prices over the last decade. On a 52-week analysis of weekly data, the median correlation – which would read +1.0 if they moved positively together – has been minus 0.7. 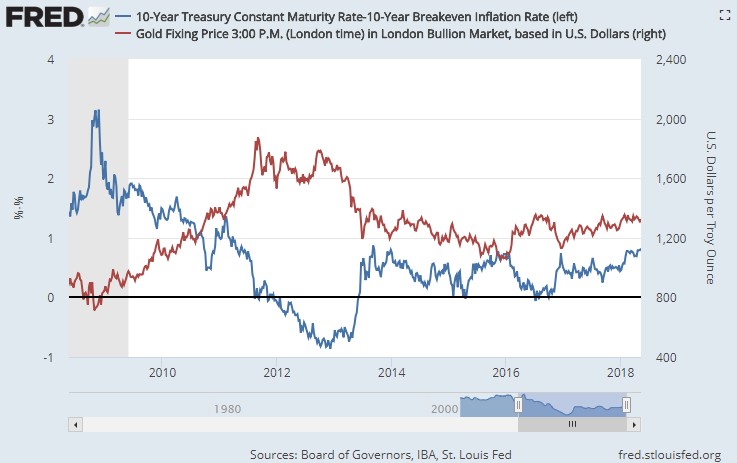 Tapering began in 2014 and new QE ended that October. Since the Federal Reserve Banks' total assets peaked in January 2015 at $4.5 trillion, they have now shrunk by $158 billion – some 3.4%.
Of that reduction, more than half has come in the first five months of 2018 as the central bank stops re-investing money from maturing US government bonds.
"[This] may not be tantamount to tightening," reckons senior IMF economist Manmohan Singh, but instead have "an easing effect [because] US Treasuries in the hands of the market, with reuse, are likely to lubricate markets [whereas] excess reserves have remained idle in recent years."
But " if the expansion of the Fed's balance sheet was essential to preserve easy monetary conditions," notes World Bank director Otaviano Canuto, "the reduction of the former can be expected to tighten the latter."
Should the Dollar continue this month's rise "gold prices might still have room to correct over the next few weeks," says a note from French investment and bullion bank Natixis' Bernard Dahdah.
But while Dahdah now forecasts a drop to $1260 in 2019's average gold price, "We think [Dollar prices] could pick up towards the last quarter of [this] year as the ECB preps the market for a normalisation of its monetary policy," he writes, "heading again towards the $1330 level."
Silver bounced harder than gold prices as New York opened for business on Thursday, halving this week's prior 2.9% drop to reach $16.47 per ounce, barely changed for May so far.
Platinum also rallied after dipping beneath $890 per ounce for the first time since mid-December.
Euro gold prices today held 1.5% below last week's 8-month peak, trading at €1093 per ounce.
Gold priced in Sterling has now halved the last 4 weeks' rise of 5% to trade at £955.