END_OF_DOCUMENT_TOKEN_TO_BE_REPLACED

GOLD PRICES extended yesterday's steep rebound in London trade Thursday, heading into the long Easter weekend above $1720 per ounce after US President Joe Biden unveiled a plan for $2 trillion of infrastructure spending on top of the $1.9 trillion in Covid relief and stimulus already underway.
Ahead of Biden's speech in Pittsburgh on Wednesday – in which he laid out a plan likened by some media outlets to F.D.Roosevelt's Great Depression stimulus of the 1930s – gold prices bottomed at $1678, the same 9-month low reached 3 weeks ago.
New figures today said US jobless benefit claims rose steeply last week, while China's factory activity was barely changed in March from the month before on the Caixin PMI survey.
But Eurozone manufacturing expanded at its fastest pace in at least 24 years on the Markit PMI series. 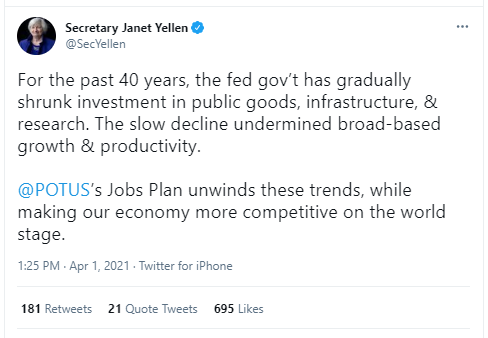 Analysts expected March's US data, due out from the ISM later today, to show the strongest activity on record, plus the strongest prices paid by factory managers since 2008.
Washington's borrowing costs today eased back in the bond market, with 10-year yields retreating 5 basis points from yesterday's fresh 14-month high of 1.74% per annum.
The US Dollar meantime edged lower again from Tuesday's 5-month high against the world's other major currencies.
"Swings in the Dollar are leading the precious complex," says a trading note from Swiss refining and finance group MKS Pamp.
"The forces [of a rising Dollar and higher US yields] have tapered and we're seeing some buying on dips as well," Reuters quotes Xiao Fu, commodities strategist at Bank of China International's London office.
"After Biden's infrastructure plan details, the market focus has shifted back to this potential inflation prospect. But I wouldn't say it's a big reversal in trend.
"Gold is still a range-bound market with upside limited by rising 10-year yields." 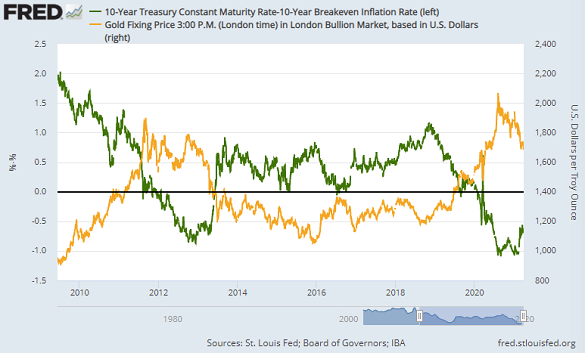 "Gold yields nothing," says Bloomberg columnist John Authers, "[and] higher rates make [it] more unappealing.
Once adjusted for inflation forecasts, "The lowest real yields in history, as seen last year, were enough to bring the metal to an all-time high in nominal terms," the former Financial Times journalist says.
"So it shouldn't be that surprising that, with real yields rising [in the first] quarter, the gold price fell."
Giant gold-backed ETF trust fund the SPDR product (NYSEArca: GLD) didn't change in size for a 2nd day running on Wednesday, needing 1037.5 tonnes of bullion and gaining 0.9 tonnes since last weekend, heading for its first weekly increase in 12.
The smaller iShares Gold Trust (NYSEArca: IAU) however shrank by 0.5% to need 504 tonnes, its smallest since late-August 2020.
Silver's largest ETF, the iShares product (NYSEArca: SLV) meantime saw another 0.7% liquidation, heading for its 8th week of investor outflows in a row.
"Investors' liquidation of gold ETFs has slowed down markedly from earlier in March," says the precious metals team at French bank and London bullion market maker BNP Paribas.
"That could signal a pause in the broader rebalancing of portfolios...[and] whilst investors are attracted by other asset classes able to generate returns from expansionary policies...the physical markets of gold in South-East Asia are proving dynamic."
The gap between Shanghai over London gold prices widened to $9.50 per ounce on Thursday, raising the incentive for new imports out of the metal's trading and storage hub into its No.1 consumer market by $3.
Customs officials in India – the No.2 gold consumer market, where prices have also flipped to a premium over London after heavy discounts throughout 2020 – meantime said they seized 2.5kg of gold smuggled by 5 passengers landing at Hyderabad from Dubai on Wednesday.
Shoppers in the Middle East's hub of Dubai " need to see a drop to a new level to be convinced there's value" says Gulf News today, quoting a local jewelry retailer.