END_OF_DOCUMENT_TOKEN_TO_BE_REPLACED

GOLD PRICES fell Tuesday in London, dropping towards 1-week lows against a falling US Dollar as longer-term interest rates rose yet again following a promise to tackle inflation, now running 4-decade highs, from Federal Reserve chief Jerome Powell.
Global stock markets meantime rose and commodity prices fell as the Kremlin – now accused of war crimes in Ukraine by the USA – called for "substantial" ceasefire talks amid fresh claims that Russia's invasion of its western neighbor is failing.
"The labor market is very strong, and inflation is much too high," said the Fed's Powell in a speech late Monday.
Echoing former Eurozone central-bank chief Mario Draghi's vow to do "whatever it takes" to sustain the currency union back in 2012, "The ultimate responsibility for price stability rests with the Federal Reserve," Powell went on, "[and] we will take the necessary steps.
"In particular, if we conclude that it is appropriate to move more aggressively by raising the federal funds rate by more than 25 basis points at a meeting or meetings, we will do so."
Betting on interest-rate futures now puts a 2-in-3 chance on the Fed hiking by a half-point at its next meeting in May, with the probability of rates reaching 2.50% or above by end-2022 put at 3-in-4.
Gold bullion fell to $1911 per ounce at London's benchmark price auction today, down 1.3% from Monday afternoon and almost $130 below 8th March's peak near all-time record highs.
The yield offered by 2-year US Treasury bonds today rose to 2.19% per annum, the highest rate since summer 2019, with the fastest 2-week jump since the global asset-price relief rally following the March 2008 rescue and then sale of failing investment bank Bear Stearns.
Ten-year yields have meantime jumped by almost 0.6 percentage points over the last 2 weeks, the steepest such jump since December 2010.
The rate offered by 10-year Treasury Inflation Protected Securities has risen less meantime, up by 0.45 points with its fastest increase since the Covid Chaos of March 2020.
Together, that now puts the so-called 'breakeven rate' of inflation as predicted by US bond-market pricing at 2.96% per annum, a record high for the gap between the yields on conventional T-bonds and TIPS bonds, which launched in 2003. 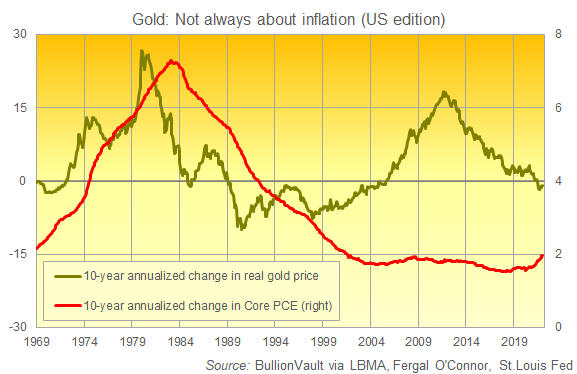 Whilst badly lagging the latest reading of 7.9% per year on the US Consumer Price Index, that outcome – if fulfilled over the next decade – would mark the steepest 10-year pace of US CPI inflation since the peak of the 'commodities super-cycle' in summer 2008, eve of the Lehman Brothers crash.
On the Fed's preferred core PCE measure, it would mark the steepest 10-year inflation since summer 1997.
With the gap between 10- and 2-year yields now the smallest since the Covid Crisis began in February 2020, "the US yield curve looks certain to invert given rate-hike history," says a headline at Bloomberg, pointing to when short-term rates come below longer-term rates, suggesting that the central bank will need to ease monetary policy sometime in the future.
"Bond market fireworks highlight recession worries," says Reuters.
"[But] the yield curve might be wrong," chips in the Financial Times.
"The Ukraine conflict is likely to continue" meantime, says Australasian bank ANZ, "increasing supply chain tensions and inflationary pressures, which will support gold prices."
Even with Russian forces shelling more residential buildings and schools on Tuesday, and with the self-declared Donetsk People's Republic (DPR) claiming to have "liberated at least 50%" of southern city Mariupol from "nationalist" control, "We are on the brink of surviving war", Ukrainian President Zelensky told Italian MPs by video link.
"This absurd war is impossible to win," said United Nations Secretary General Antonio Guterres separately.
"Even if Mariupol falls, Ukraine cannot be conquered city by city, street by street, house by house."
Gold prices for Euro investors today erased Monday's small rally to trade back at €1740 while UK gold prices in Pounds per ounce sank to 3-week lows, down at £1441.
With the Bank of England now raising short-term UK interest rates to 0.75% in the face of inflation at 5.4%, ten-year UK Gilt yields today hit their highest since late-2018 at 1.70% per annum.
Germany's 10-year debt meantime offers 0.50% per annum, a full percentage point higher from last summer's levels and dramatically above the record negative lows of March 2020, as the European Central Bank continues to hold its deposit rate at minus 0.50%.