END_OF_DOCUMENT_TOKEN_TO_BE_REPLACED

GOLD and SILVER prices jumped lunchtime Wednesday in London, erasing the last of this New Year's previous drop to trade near $1825 and above $23 per ounce respectively after new data said the US economy is running hotter than analysts expected.
Estimating the number of jobs added in December, the ADP Payrolls report said that net hiring across the world's largest economy totalled 807,000 last month – more than twice consensus forecasts – with almost 1-in-3 new jobs coming in the leisure and hospitality sector despite the US's strong and rising Covid infection rate.
With inflation in consumer prices already running at multi-decade highs worldwide, precious metals also jumped in terms of other major currencies, with gold re-touching last Friday's 5-week high in Euros at €1613 and erasing most of this week's previous 1.1% drop in UK Pounds to reach £1348.
Rising prices overnight had however already seen the gap between London and Shanghai gold quotes slip to barely $2 per ounce, the smallest incentive for new imports of bullion into China – the precious metal's No.1 consumer nation – in almost 7 weeks.
China's Lunar New Year holidays, starting in 2022 on the last day of January, have overtaken India's festival of Diwali as the world's single-heaviest consumer event for gold.
The 5 Januarys prior to 2020's Covid Crisis saw Shanghai premiums average almost $9 per ounce, holding at $8 ahead of that year's Lunar New Year but averaging a discount of 20 cents per ounce in 2021 as China's domestic gold demand began to recover from the impact on sentiment and retail sales of the pandemic and lockdowns. 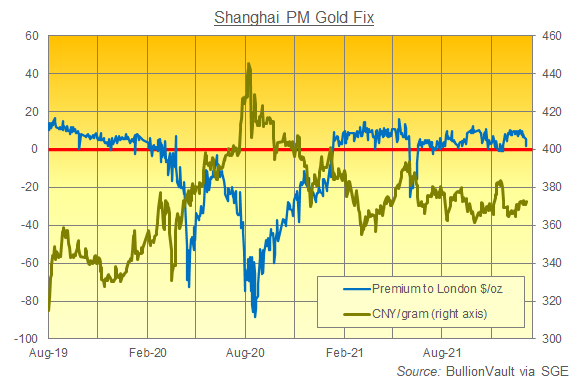 The 1 million residents of central China's Yuzhou were put back into lockdown overnight after the city reported 3 cases of Covid.
Already in lockdown with 1,500 cases reported since this time last month, the 5-million population of Xi'an will see the end of their latest Covid restrictions only when the virus shows "zero social transmission" according to the government.
Back in the financial markets, 10-year US bond yields, a benchmark for the Treasury's borrowing costs and many medium-term private-sector interest rates, held at 1.66% per annum following the ADP jobs estimate Wednesday, the highest in 7 weeks.
German Bund yields rose near their highest since May 2019, edging up to minus 0.09% on 10-year debt.
UK Gilts also fell in price, driving 10-year yields on London's sovereign debt up to 1.09%, more than one whole percentage point above March and August 2020's record lows.
Nuclear-armed North Korea meantime test-fired a ballistic missile into the Sea of Japan overnight, its first such test of 2022.
With China's Communist dictatorship meantime lambasting Taiwan – which it claims is part of its territory – for a "provocative" air-force drill overnight, the approval of Taipei opening a diplomatic office in Vilnius "was a mistake" said Lithuania's President Gitanas Nauseda yesterday, following what he called "unconventional measures against Lithuania" by Beijing.
A Taiwanese liquor company this week bought a consignment of Lithuanian rum apparently blocked by customs officers in the People's Republic.
Ailing Chinese property giant Evergrande will meantime meet with domestic Chinese bondholders this weekend to try re-arranging $700m-worth of debt.
After Tuesday's ISM manufacturing report showed prices paid by US factory managers easing sharply in January, with growth in new orders also slowing, today's Markit PMI report for the 19-nation Eurozone services sector also slipped and missed analyst forecasts, extending the slowdown in growth from July's record high.
While yesterday's ISM surveys don't cover much of the surge in Omicron Covid infections, "Shortages of critical materials, high commodity prices and difficulties in transporting products continue to plague reliable consumption" says the institute's manufacturing committee.
Overall economic growth in the Euro area has meantime "eased to a 9-month low," says Markit of its latest data, " resuming a slowdown trend amid a resurgence of Covid-19 infections."
Global stock markets extended their rise to a 2nd day of new all-time highs on the MSCI World Index, but US-listed tech stocks slipped again as longer-term interest rates rose faster than short-dated rates – steepening the yield curve to suggest stronger economic growth ahead – and pulling PC and gadget brand Apple (Nasdaq: AAPL) back below the $3 trillion market-cap first achieved Monday.