END_OF_DOCUMENT_TOKEN_TO_BE_REPLACED

GOLD PRICES held onto this week's rebound in US Dollar terms on Friday, trading 3.3% above Wednesday's new 2.5-year low as the world's No.1 currency extended its sharp retreat from 2-decade highs against the rest of the world's money into the end of the third quarter of 2022.
Trading at $1670 per ounce during the last London benchmarking auction of September, gold priced in the Dollar was on track for a quarterly drop of 8.1% –  the steepest loss since Q1 2021 – at its lowest quarter-end price since Q1 2020.
Oil prices meantime rallied but held over 30% below end-June, on track for their steepest quarterly drop since the Covid crash of Q1 2020.
US stock markets opened the day with another drop, losing 4.4% for the third quarter of 2022 on the S&P500 index, as Federal Reserve vice-chair Lael Brainard said in a speech that the central bank won't "pull back prematurely" from hiking rates to curb inflation.
The S&P500 has now fallen for 3 calendar quarters in a row, its worst run since its 6-quarter drop during the global financial crash of Q4 2007 to Q1 2009.
Losing 24.0% from New Year 2022's record high while gold priced in Dollars is down 8.2% since the start of January, the S&P has outperformed the EuroStoxx 600 index however, with the largest European equities – including the UK's – now down 32.6% in Dollar terms. 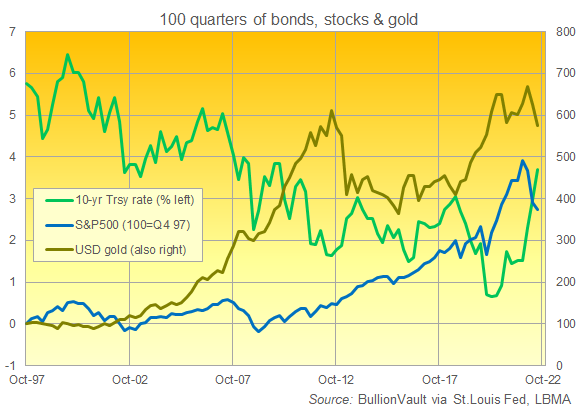 "Monetary policy will need to be restrictive for some time to have confidence that inflation is moving back to target," Brainard said in New York Friday morning.
"[But] we also recognize that risks may become more two-sided at some point...Uncertainty is currently high."
A week after crashing both the Pound and the Gilt market by announcing unfunded tax cuts without any accompanying economic forecasts, the UK Government today met with the independent Office for Budget Responsibility only to confirmed that while the Treasury will receive the OBR's verdict next week, it still  won't publish them until late November.
"We are monitoring financial markets developments – and, in particular, [the] UK-specific component – very closely," said Bank of England chief economist Huw Pill in a speech last night, a day after the UK central bank intervened to buy Gilts and ease the impact of plunging bond prices on the pensions industry.
Pill's comments mark the first official acknowledgement that new Chancellor Kwasi Kwarteng's "mini budget" was the cause for Sterling's plunge to new record lows versus the Dollar plus a record jump in the UK's borrowing costs.
The UK gold price in Pounds per ounce fixed today above £1500 per ounce at 3pm, little changed from Friday last week.
But rising over £10 per ounce from end-June, the gold price in British Pounds has now risen for 6 calendar quarters in a row, matching its best unbroken run since the end of the 1970s, when a falling Pound, weak growth and soaring inflation resuilted in the IMF crsis.
Like the Dollar price, in contrast, the Euro price of gold has now fallen for 2 quarters running, albeit to €1712 per ounce – a record quarter-end high outside Q1 and Q2 this year.
Silver prices meantime rallied harder than gold against the Dollar to reach $19.12 per ounce, cutting the more industrial precious metal's Q3 loss to 6.3% with a rally of almost $1.60 from 1st September's 26-month low.
Gold priced in the Dollar has not fallen for more than 2 quarters running since the precious metal's post-financial crisis bear market hit bottom at the end of 2015.
Like developed-world stock markets, Western government bonds have now fallen for 3 quarters running, losing 1/5th of their value so far in 2022 in US Dollar terms on the S&P Global Developed Sovereign Bond Index.
That plunge in price has pushed up the United States' borrowing costs to 3.71% per annum on 10-year Treasury bonds, down from Wednesday's touch of 4.02% – the highest peak since the Lehmans Brothers Crash of autumn 2008.
Year-on-year, 10-year T-bond yields have risen 2.20 percentage points since 30 September 2021, the sharpest 4-quarter jump since the end of Q2 1984, which came amid a 6 calendar-quarter run of falling bond prices driving up borrowing costs.
US Treasury bonds have fallen for 5 consecutive quarters twice in the last decade.