END_OF_DOCUMENT_TOKEN_TO_BE_REPLACED

GOLD PRICES fell in all major currencies except the Yen on Monday as the Japanese currency fell once again versus the Dollar despite further FX market intervention by Tokyo, writes Atsuko Whitehouse at BullionVault.

British bond prices rallied and the UK Pound meantime held firm after ex-prime minister Boris Johnson pulled out of the race to lead the UK's ruling Conservative Party, leaving Rishi Sunak – the loser of last month's contest to replace him – as the new resident of Downing Street as Liz Truss quits the post following her disastrous unfunded tax-cutting budget.

The UK gold price in Pounds per ounce slipped back from Monday's Asian opening to trade £10 above Friday's new 11-week low of £1449.

Spot gold prices in the US Dollar edged lower 0.6% to $1647 per ounce, after surging to $1670 overnight, extending Friday's rally from their lowest intraday level in 2.5 years.
"Apart from speculation about the timing of a peak-and-reversal in US Treasury [bond] yields, it is the current wild ride in USD/JPY that has got the algos going wild in both directions," says derivatives platform Saxo Bank's strategy team, referring to programmatic trading accounts.
Gold priced in the Japanese Yen rose 0.5% to ¥7,905 per gram after making volatile moves of nearly ¥200 per gram in 10 minutes, as the currency continued to weaken despite fresh suspected intervention by the Bank of Japan – acting on behalf of the Ministry of Finance – for a second successive day.
The Yen has tumbled 22% this year against the Dollar as Japan's central bank keeps its key interest rate below zero while the US Federal Reserve and other central banks hike rates aggressively to try fighting the worst consumer-price inflation in 4 decades. 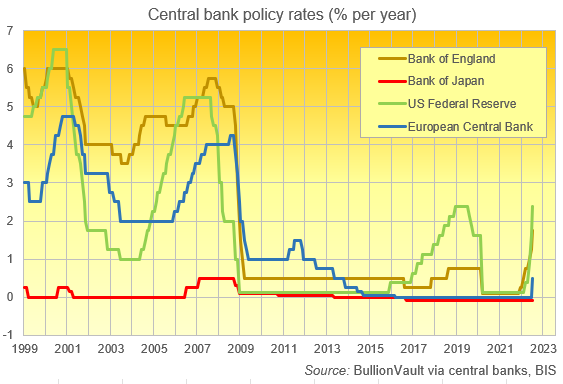 The European Central Bank meets to decide Euro rate policy on Thursday, and a poll of private-sector economists suggests a 75 basis points rate increase to 2%.
Looking at US rates, now at 3.25%, "Front-loading was a good thing...but overshooting is costly too," said Chicago Federal Reserve Bank President Charles Evans on Friday.
"I think the time is now to start talking about stepping down," added and San Francisco Fed President Mary Daly, also urging caution at next week's policy meeting – still expected to deliver a 5th consecutive 75-basis point hike but with bets now rising for only a 50bp rise in December.
On the FX market today, the Japanese Yen hit a low of ¥149.70 per US Dollar overnight before being swept to a high of ¥145.28 within 1 minute.
But with the Japanese authorities already estimated to have spent $20 billion in September and another $30bn last week – buying Yen to defend its value for the first time since 1998 – the JPY was back to worse than ¥149 by lunchtime Monday in London, only marginally stronger than Friday's fresh 32-year lows near ¥152.
"In previous crises involving British Pounds and Italy's Lira," says Daisaku Ueno, chief FX strategist at Mitsubishi UFJ Morgan Stanley Securities in Tokyo, referring to the European Monetary Union debacle of autumn 1992, "the authorities ended up failing to defend their currencies.
"Likewise, Japan's stealth intervention only has limited effects,"
Gold priced in Euros meantime fell 0.9% to €1676 per ounce on Monday, while European stock markets were higher amid the current resolution to the UK's latest political chaos.
European government bond prices also rose, pulling longer-term borrowing costs lower from their recent multi-year highs and led by UK Gilts, now offering the lowest annual yield since now failed UK PM Truss and her chancellor Kwasi Kwarteng unveiled the heaviest tax-cutting budget in 50 years, spurring a surge in UK yields and a new record low in the Pound