END_OF_DOCUMENT_TOKEN_TO_BE_REPLACED

GOLD PRICES sank $15 at the start of New York trade on Wednesday, erasing this week's previous 1.1% gain to new 2-month highs as US stock markets rebounded sharply from their sudden 3-month lows ahead of today's monetary policy statement from central bank the Federal Reserve.
With gold bullion prices hitting $1832 per ounce and silver spiking back down to $23.60, commodities also rose in contrast to precious metals, with crude oil hitting fresh 7-year highs near $90 per barrel of Brent crude but European natural gas prices easing 3.2% lower.
Russia's President Putin today dismissed EU-US talk of financial sanctions against him personally over the Ukraine stand-off, while the leader of his ruling United Russia party in the State Duma called on the Kremlin to start arming separatists in the would-be break-away regions of Luhansk and Donetsk.
New York's broad S&P500 index closed Tuesday 9.1% below the fresh all-time high set on the first trading day of 2022 – its steepest 3-week fall since September 2020 – helping the MSCI World Index record its 6th drop in a row, its longest run of losses since the global Covid Crash of February 2020.
Asian stock markets closed today flat overall but Europe rebounded sharply, adding 2.0% on the EuroStoxx 600.
Betting on interest-rate futures continues to see next-to-no-chance of any policy rate change in Wednesday's statement from the FOMC, with "lift-off" now 91% certain for March instead.
But against that consensus, and despite the US Dollar rising towards end-2021's 18-month highs on its trade-weighted index against the world's other major currencies, gold still topped $1850 per ounce yesterday in the face of longer-term interest rates also rising in the bond market.
So-called "real" interest rates – as implied by the yield on 10-year Treasury inflation-protected bonds – last week touched 19-month highs at minus 0.50% before slipping back to minus 0.63%.
With gold prices also showing an underlying rise, gold's correlation with 10-year TIPS yields – showing a typical reading of minus 0.49 across the last 15 years – has now moved to +0.53, its most positive level since June last year. 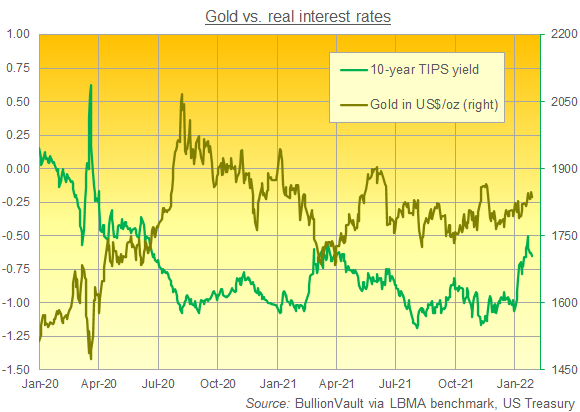 "Gold is simply becoming a Fed policy mistake hedge," Bloomberg quotes Nicky Shiels, strategiest at bullion refiners and finance group MKS Pamp.
"An accelerated Fed tapering will cause financial conditions to tighten further and gold to outperform equities, to a point."
"No time to waver, Chair Powell," the Fed chief is advised by a headline at Reuters today.
With US inflation running at 4-decade highs of 7% and the jobless rate near multi-decade lows beneath 4%, Powell will today "talk up the economy without sounding apocalyptic on inflation and prepare the ground for a March liftoff" reckons one economist.
Key to today's Fed statement will be discussion of its QE asset purchase program, due for suspension in March, plus plans for starting to unwind those $8.7 trillion of bond holdings.
"Gold remains a safe haven and an insurance against geopolitical risks, and the risk of persistently high inflation is also positive for gold," reckons André Christl, CEO of German refining group Heraeus, in a new precious metals forecast.
New investment inflows saw giant bullion-backed exchange-traded products the SPDR Gold Trust (NYSEArac: GLD) and the iShares Silver Trust (NYSEArca: SLV) both expand again on Tuesday after marking their heaviest 1-day ETF inflows in 18 years and almost 12 months respectively, swelling by 0.5% and 0.4% from Monday's level.
Smaller gold ETF the iShares Gold Trust (NYSEArca: IAU) in contrast saw light liquidation, edging back 0.4% with its 1st decline in investor holdings in more than 2 weeks.