END_OF_DOCUMENT_TOKEN_TO_BE_REPLACED

GOLD PRICES held yesterday's sharp 2.7% jump when the US Fed held interest rates unchanged on Thursday, trading towards the highest weekly close in 14 months above $1268 as the Dollar hit its lowest levels since October on the FX market.
Asian stock markets extended Wall Street's overnight gains, but European equities fell into the red and New York futures pointed lower as crude oil rose further with broader commodity markets, recovering $40 per barrel of Brent in European trade.
Government bond prices also jumped on Wednesday's widely-expected Fed news, pushing 10-year US Treasury yields down to 1-week lows at 1.88% on Thursday.
US consumer-price inflation, when 'volatile' fuel and food are stripped out, last month jumped above 2.3% per year, new data said yesterday – the fastest pace in so-called "core CPI inflation" since the collapse of Lehman Brothers marked the start of the global financial crisis' deepest slump in September 2008. 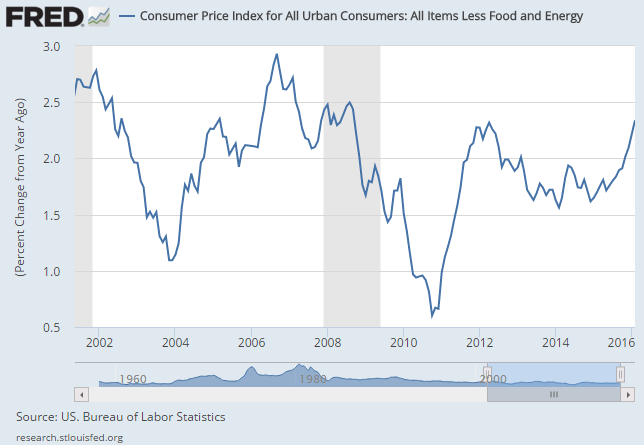 "Global economic and financial developments continue to pose risks," says the Fed's latest monetary policy statement.
"Inflation is expected to remain low in the near term, in part because of earlier declines in energy prices."
US interest rates will end 2016 no higher than 1.0% according to 8 of the 15 policy-makers' assesments, double the number in December, when the central bank finally raised rates to a ceiling of 0.50% after suggesting a hike all through 2015.
Gold prices jumped 2.7% inside 2 hours of the Fed announcement, gaining $20 per ounce from near 2-week lows of $1229 in the first 15 minutes.
"[Wednesday's] technical reversal at the lows of $1230 [mark a] 23.6% Fibonacci retracement of January's low to March's high," says Japanese conglomerate Mitsubishi's precious metals analyst Jonathan Butler, and "confirms that gold’s bull run is intact, although we may see some near term profit taking /rally fade after the recent sharp move higher."
"From a macro/technical perspective," adds Canadian brokerage TD Securities' analyst Chris Dutton, "we believe that the recent recovery in gold may be signalling an inflection point and the potential beginning of a late cycle re-inflation phase.
Looking at the 7 previous slumps in crude oil prices across the last four decades, Dutton notes how the disinflationary impact on headline living costs soon fades.
" Gold prices almost always move higher in anticipation of this very simple re-inflationary math,” he says.